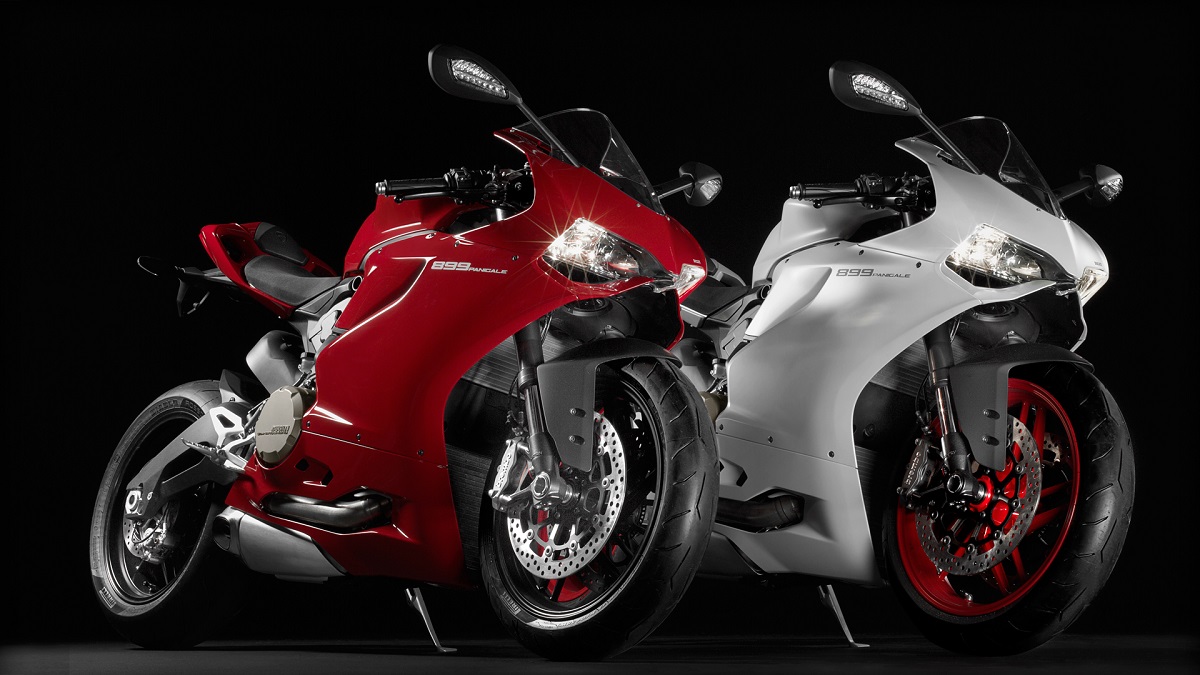 The Italians are well-known for producing exceptionally high-end products, ranging from great pastas and suits to exotic cars and well of course, motorcycles. Ducati first established itself in 1944 by producing the Cucciolo (meaning “puppy”), a small engine intended to be put on bikes. This engine sold so well that the company began building motorcycles – the rest, is history. Recently, I was asked by Ducati Richmond to take the new 899 Panigale for an extended test ride – who am I to complain, right? For four great sunny days, I rode the new 899 as my daily commuter, and at the end, I was a little disheartened to return the keys.
The 2014 899 Panigale, or 899 for short, replaces the popular 848 EVO, the baby superbike in Ducati’s lineup. Launched in 2013, Ducati claims the 899 is the best of both worlds: a pure track bike as well as a supersport road bike. What did we think of the new 899? Read on. The 899 Panigale is a gorgeous bike, becoming eye-candy where ever it was parked. I would be torn between the two colours of choice – Arctic White Silk or Ducati Red. If I really had to choose, I’d probably end up going with the Arctic White because it’s clean, silky smooth, offsets the black frame and highlights the red wheels. The look of the 899 is very similar to the 1199, but just a tad smaller; however, upon closer inspection, there are some differences. For example, unlike its older brother, the 899 uses aluminum rather than magnesium for some engine covers; similarly, the rear subframe is steel and not aluminum. The biggest difference with looks is that big brother gets a single swing-arm vs the 899’s simple twin-sided design. What does all this mean? Well, for most people, not much; however, it does mean that the smaller 899 actually weighs about 5 kg more than larger 1199. It’s worthwhile to note that this bike is in no way “heavy” as it’s actually much lighter than the outgoing 848 EVO. Oh, and by the way, the 1199 also has LED headlights, just in case you wanted to know.
After a quick run-through of the bike, I fired it up and immediately realized why I was always attracted to the Ducati brand. There is something mesmerizing, and daunting, of the Desmodromic, 148 hp, L-twin engine when it comes to life. The rumbling of the side exhausts warns others that this bike means business. The all-new LCD display is crisp and clear, although I would have preferred the TFT full-colour version found on the 1199. On the left handle are the controls for settings, which are easily accessible; keep in mind not to play with these controls until you get used to the bike. Riding position is exactly the same as on the 1199, and rather comfortable, much more-so than the outgoing 848 EVO. Thankfully, there is more seat padding as compared to the 1199, which does make this bike more street friendly than its older brother. My first few hours on the bike were quite reserved, as I was testing out the new features. The ride is surprisingly comfortable for a superbike of this calibre. One thing I’ll point out here, and most Ducati owners already know, is that there is a bit of heat given off on the sides of the bike. Within a short period of time, my inner thighs were beginning to feel a tad warm. No, this is definitely not a deal breaker for me, but wear jeans at the least. Riding around Richmond, Surrey, and Coquitlam gave me ample opportunity to test the nimbleness of the bike, and it did not disappoint. Unlike the Japanese brands, however, the 899 does not like sitting around and puttering in traffic below 2000 rpm. But it is a twin, so below 2000 rpm doesn’t really count.
The next day, I decided to wear my full racing leathers because I was going to be doing a lot of riding. The leathers made the ride even more comfortable and allowed me to push the bike further and have some more fun. The 899 is crisp and handles very well, thanks to the 43mm Showa Big Piston Fork, which provides damping under low-pressure conditions. The adjustable Sachs rear monoshock gave excellent response for our roads. Thanks to these new innovations in suspension and a 50:50 weight distribution ratio, taking corners and tight curves was a breeze along the Sea-to-Sky Highway. The 899 Panigale felt right at home on these roads, allowing me to throw it around all bends that came my way.

What can I say about the power of the 899 other than there’s tonnes of it. The fast-revving engine responds the instant you tweak the throttle, and the exhaust fires like bursts from a 30mm gun. This is definitely not your regular lumbering V-twin. Above 7,000 rpm, the Panigale pulls strong, almost too strong for a novice rider. The bonus on the 899 is the Ducati Quick Shift (DQS), which allows the rider to shift between gears on acceleration without using the clutch. Even though this feature is available and safe, I still found myself using the clutch most of the time. Another great feature of the Panigale is the availability of 3 pre-set Riding Modes: Race, Sport, and Wet. The Ducati Riding Modes instantly modify the power delivery by the engine, ABS activation level, Ducati Traction Control, DQS, and Engine Brake Control, as well as the graphics on the instrument panel. I wasn’t able to test the Wet mode, but there was a huge difference between the Race and Sport modes. And if you need to stop fast, just grab a handful of brake and the Brembos will stop you in an instant, almost to the point of throwing you over the handlebars if you’re not careful. Ducati has found a sweet spot with its 899 Panigale. It has a tonne of power and feels at home on the track or road. I found the 899 Panigale to have the perfect balance of potent power mixed with the latest innovations in safety, offering riders a truly involving riding experience. The 2014 899 Panigale may seem steep at $16, 295, but it is a Ducati and it’s Italian.