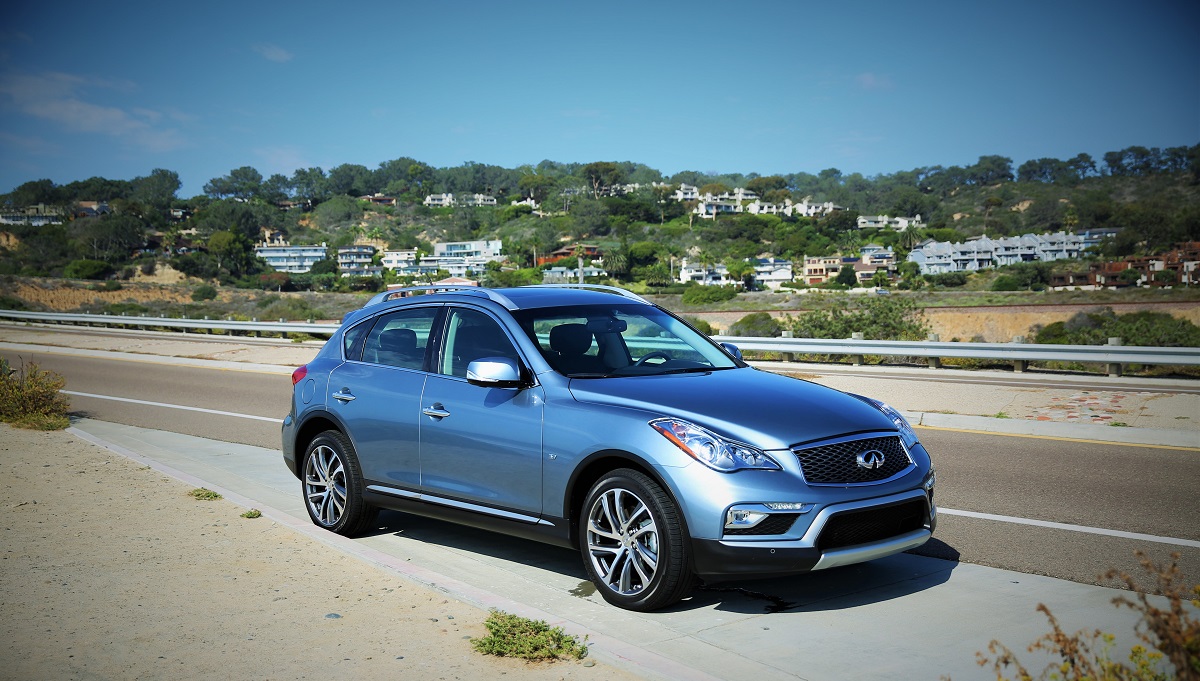 by: Jag Dhatt
San Diego, CA: The information package from Infiniti said it all: the new QX50 has, “the body of a crossover, [but] the heart of a coupe.” That’s a pretty bold statement to make about this, or any, vehicle in this category, and one I was anxious to explore. So, when I was invited to beautiful San Diego to drive the newest iteration of Infiniti’s compact SUV family, how could I resist. Even though Infiniti’s usage of the “Q” and “QX” branding may not be popular with people who were used to the “G” status, sales numbers tell a completely different story. Over the past 3 years, Infiniti sales numbers have been consistently increasing, so much so that you can see it on the roads. The new QX50, which is pretty much a refreshed and updated EX37, is a welcome addition. For 2016, the front has a lower fascia, new LED lights, and a great-looking new grille, which is similar to its older siblings. The side mirrors now feature integrated turn signals and the rear has a refreshed bumper and lighting, more in line with the Infiniti look. The most apparent upgrade is with its size: it’s now 113mm longer, which results in a 109mm increase for rear legroom (100mm more knee room). With the front seat set to my perfect driving position, I nestled into the back seat and was surprised that it was roomier than it appears – compared to the EX, much better. Now, not to be overly concerned with rear legroom, it still might be lacking for some people. Infiniti also confirmed that for the new model, there won’t be a short-wheel base option.

The inside of the vehicle is where the luxury status of Infiniti becomes clearly evident. All materials are top notch and available in some great colour combinations. There’s stitching, real leather, and real wood finishes. I did find strange the three vertical strips on the passenger side dashboard – no clear purpose and in my opinion, takes away from the look. Most buyers won’t mind though. The infotainment system is similar the one in other Infiniti models and performs well. The best part is the 360-degrees surround camera system – Infiniti was the first to offer this technology and I think it’s one of the best innovations for any vehicle. So does this crossover actually drive like a coupe? Our test route took us from downtown San Diego to the back desert roads and foothills of the California coast, where there were boundless opportunities to really open up the engine. Infiniti has kept the 3.7L V-6 that pumps out 325-hp and in my opinion, it’s the perfect powerplant for this vehicle. Whenever needed, power was available and let me tell you, this thing is torquey. What’s even better is the superb handling – the mix of power, steering, and handling really makes you wonder if you’re driving a crossover, because it darn well feels like a coupe. But so many times, my fingers reached for the non-present paddle shifters. Sure, there is a sport-mode and you can go through the gears via the shifter, but it’s not the same feeling.
After about 64 miles, we stopped at Julian Pie Company to enjoy the area’s best pie. One of my colleagues scraped his plate clean; he said the pie was that good. During the break, we explored the QX50 a little more. The cargo area is abundant and as a new-class first, power folding rear seats, a feature normally found in higher-end models. Flip a switch to fold or raise the 60/40 rear seats; I did find, however, that at times, the rear seat belts got stuck in the latch when the seats were fully raised, making me lower them again and then manually keep the belt away. Getting back to the cargo area, I guarantee that, with the rear seats in the upright position (i.e. not folded), the QX50 will hold a full-size stroller and some luggage as well. After the pit stop, my driving partner Neil Vorano took the pilot’s seat and I had a chance to explore the crossover/coupe some more. I found the seats, heated of course, to be quite comfortable, considering we spent close to 6 hours in them. For Canada, only AWD will be available whereas US buyers can choose from either AWD or rear-wheel. Since we were able to drive both, Neil and I both agreed that the AWD had slightly more body roll, but that being said, it doesn’t take away from the driving experience. For Canadian buyers, the AWD will provide the necessary traction that they have come to expect from Infiniti for our weather patterns.
You have to hand it to Infiniti for providing great venues for vehicle launches. Journalists were treated to lunch at the uber-trendy and posh Rancho Valencia Resort and Spa, where only luxury vehicle owners need apply. After our meals, Neil and I headed back towards San Diego, passing lime orchards, a place where we just had to stop….to, you know, test the all-wheel drive functionality. Once we got the thumbs-up from the farmer tending the orchard, we made our way amidst the lime trees and took some great photos. And a few limes didn’t hurt either.

The final leg of the test drive took us through some urban areas, the coastline, and finally back to our hotel in downtown San Diego. I can honestly say that the new QX50 will likely make a presence in the Canadian market; the vehicle has a great engine, a luxurious interior, and the build quality you would expect from Infiniti. So, in the end, does the 2016 QX50 have the body of a crossover and the heart of a coupe – you bet!
Editor’s Update:
After spending a week with the new 2016 QX50 in Vancouver, my expectations of the vehicle have either been met or surpassed. The rear seat might be a little cozy for some, but my daughters and wife said they were pleased with the room. And yes, our full-size stroller easily fits in the cargo area!