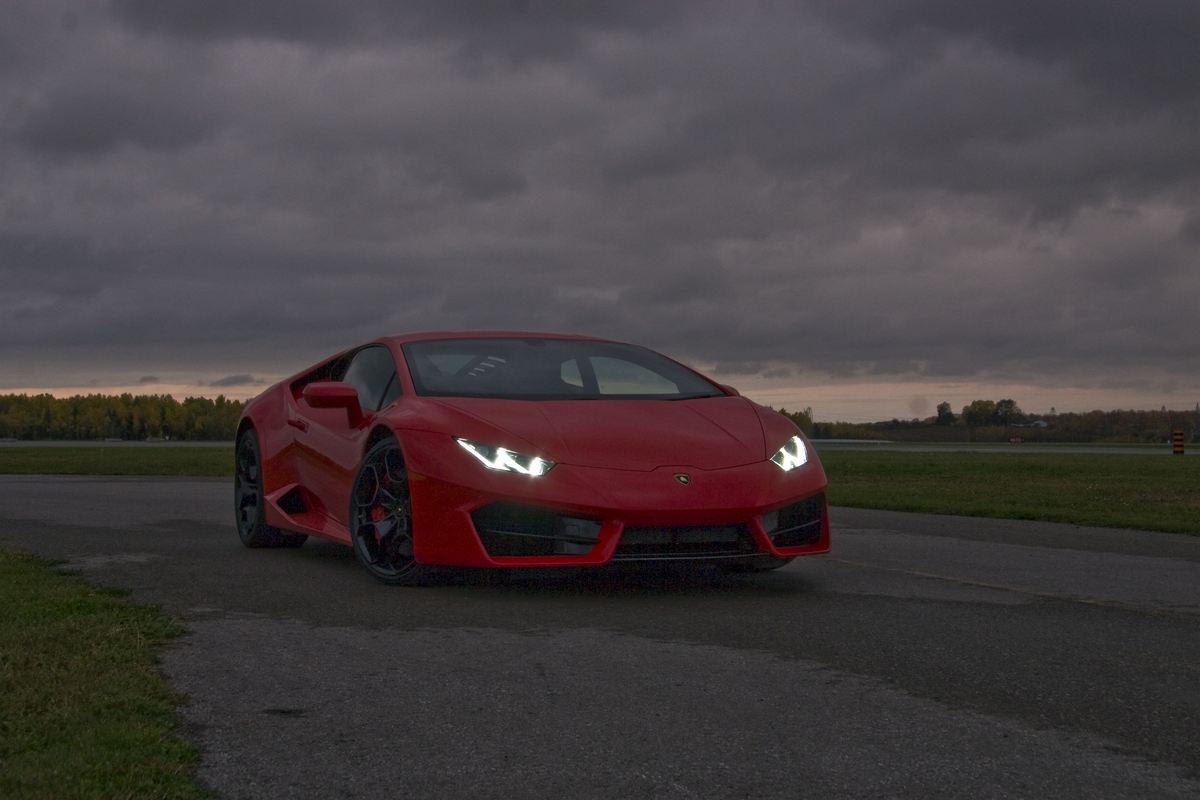 Story and photos: Lesley Wimbush
You’ve got to be a certain kind of person to own a Lamborghini. It’s not just the price factor – there are many cars with similar sticker shock. And there are plenty of others whose power and handling prowess far surpass the Italian luxury brand’s.
But for sheer, ostentatious display of wealth and “look at me” factor, few come close to the raging bull.
After a few days with the Huracan LP580-2, I realized that I wasn’t cut out to be a Lambo owner. Never mind that my bank account’s short a few triple digits and that this “entry level” supercar is worth more than what I paid for my house. It’s the relentlessness of being the centre of attention everywhere, all the time, that gets overwhelming after the initial rush wears off. Of course, for the typical exotic car owner, that’s part of the allure. And frankly, the Huracan shows a bit more visual restraint than some of Lamborghini’s more overtly flamboyant, decahedron-styled offerings. This isn’t the Lambo you’d buy if you’re into cruising slowly through the café district, sport mode engaged, turning heads with exhaust blatt downshifts. The ostentatiously wealthy are unlikely to be impressed that this is the least expensive model in Lamborghini’s portfolio, that it’s less powerful – and that it lacks the brand’s signature four-wheel drive.
No, the Huracan LP580-2 is being touted as the Lamborghini for “real drivers”.
It’s less powerful than the AWD Huracan LP 610-4 that arrived in 2014, but lighter, better balanced and with the power directed solely through the rear wheels, the LP580-2 may just be best-handling Lambo of them all.
Sure, the 5.2 litre V10 has been detuned – from 602 to 572 to make the rear-wheel-driven coupe a bit more manageable. That’s rather a moot point when you consider it’s the lightest Lamborghini you can buy. Getting rid of the differential, its related hardware shaves off 33 kg – lightness being a prime ingredient for any true sports car. It also rearranges the weight balance to 40/60 front/rear from 43/57.
The steering software’s been tweaked, and the suspension retuned to deliver crisper turn-in and better handling. There are three drive modes: Strada (Italian for street), Sport, and Corsa (race), with increasing degrees of suspension adjustment and throttle response. Clearly, this Lambo’s been engineered for more than boulevard cruising. Surprisingly, the LP580-2 is fairly easy to live with, if not exactly practical. There’s not much room in the two-seater cockpit, and the forward “frunk” can accommodate little more than a small carry-on. But the highly-bolstered sport seats offer plenty of adjustment, and when left in “Strada” mode, the LP580-2 behaves rather civilly. There’s only one available transmission; a seven-speed dual-clutch automatic with paddle shifters. Purists will probably moan about the lack of manual gearbox, but the DCT rips off beautifully-executed shifts in Sports mode, the exhaust popping and crackling delightfully.
The thick, flat-bottomed wheel feels nicely weighted when cruising, firming up depending on which drive modes selected. Particularly nice are the wheel-mounted roller buttons for the turn signals – they’re so easily accessed it’s a wonder they haven’t become industry standard. The cockpit is bisected by a bank of switchgear, with a fighter-jet inspired red start button, and Audi-style MMI controller. Upholstered in suede and leather with aluminum trim, it’s a purposeful environment if not overtly sumptuous. It comes with a fairly modest colour display with navigation, and while there is a decent audio system on board – you’d be crazy to opt for it over the mellifluous rumbling of the V10 right behind your shoulders. Flick the drive mode switch to “Corsa” and that rumble becomes a snarl, which escalates to a banshee scream at speed.
Throttle and shift response are laser-quick, and the suspension becomes racetrack firm. It also removes the traction nannies – and with so much power and lively handling, it’s really easy to break the rear tires loose in the LP580-2. Only marginally slower than the more powerful LP 610-4, which blasts from 0-100km/hr in 2.8 seconds, the LP580-2 at 3.3 is one seriously fast car.
Fortunately, the exclusively developed Pirelli rubber has terrific grip, and the test car came with optional carbon-composite brakes – a must for any track-day enthusiast.
While the Huracan LP580-2’s base price of $219,500 makes it the most affordable Lamborghini available, slathering on options such as the transparent engine bonnet with carbon forged trim, magneto rheological suspension, red painted callipers and carbon-composite brakes quickly brings the price up around $260,000.
But when you consider that’s roughly half the price of a base Aventador, the Huracan LP580-2 just might be the best Lamborghini money can buy.