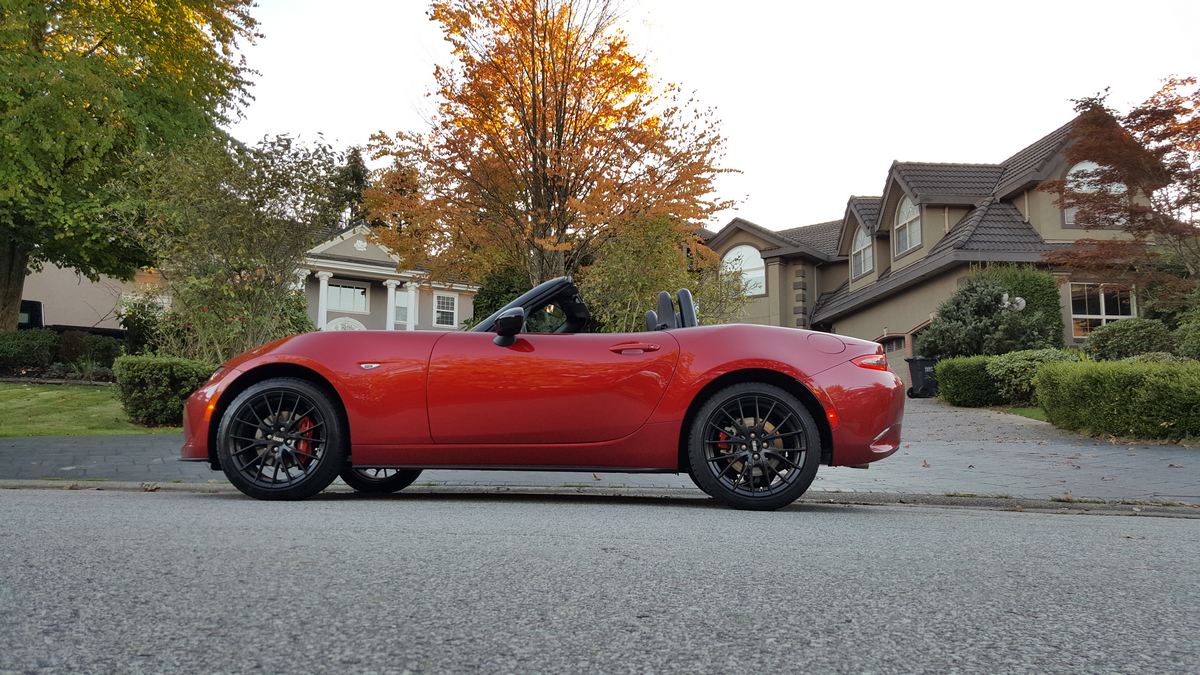 by: Benjamin Yong
With today’s strict safety regulations and emphasis on automated creature comforts of every sort, it’s become an unfortunate fact of life that any new generation of vehicle being introduced is going to be bigger and heavy than the last. While this is true of common cars, the 2016 Mazda MX-5 Miata is no common car.
Buyers can finally get their hands on the nimble fourth iteration of the legendary roadster, first teased to the world in 2014. One of the final badges in the current Mazda lineup to get the efficient SKYACTIVE/flowing KODO Soul of Motion makeover, enthusiasts will be pleased to see that while almost all the styling is drastically different, the “smiley face” front bumper opening has been retained. Listening to the rumblings of interested parties, thoughts on the new exterior design seem split down the middle. Some like the radical departure from MX-5’s of old, giving the car an avant-garde aesthetic of Jaguar F-Type meets BMW Z4. Others can’t help but see the face of a catfish or some kind of aquatic creature. I had numerous people approach me — an older gentleman on a Harley rolled by and simply commented “not bad,” while another long-time gearhead driving a mid-90s Mercedes-Benz C-Class lamented the step away from traditional British styling.
During my time with a Blue Reflex Mica press vehicle in GT trim, I came across a 1990 to 1997 NA chassis and of course I just had to line them up side-by-side. Then came the shocking revelation: the new ND is actually shorter than the original, by about 33 millimetres (and shorter than the outgoing model, by 81 mm), although it does look significantly more muscular and filled out. The 2016 has made bold moves in the interior as well. Previous Miatas all possessed similar layouts: the classic multi-dial instrument cluster with a front and center oil pressure gauge, the centre cubby harbouring a fuel door release lever stealthily hidden inside. Surprise! Neither of those exists anymore. Save yourself the embarrassment I went through, half my body hanging out the side of the car trying to peer into the forward facing storage compartment looking for a switch, and just hit the power door unlock button that will release the gas lid.
Another quirk I should mention is there is indeed the presence of a 12-volt cigarette lighter adapter, if you need one. Look under the passenger side dash in the footwell. Also, it should be noted that there is barely any storage space in the cabin (read: no glove box). You’ll have to make do with a tiny pocket next to the emergency brake, and the aforementioned compartment between the two seats. To keep the weight down, there aren’t very many heavy electrically assisted creature comforts. Power windows, sure, but in true throwback fashion, seat adjustment and even the top is completely manual. I was at first taken a little aback by the absence of the power retractable hardtop that I grew quite fond of during the last go-round, until a colleague assured me the soft top operation is not like what I was imagining.
On the original NA, putting up the top usually involved getting out of the car, hoisting it up, getting back in the car and then securing two spring latches. Now, you can simply release the single clasp, reach behind you while still sitting in the driver’s seat, and fling the lightweight top one-handed and clamp it down, all in a matter of seconds. Simply beautiful.
Press the engine start button and the twin tailpipes at the rear emit a pleasant burst of sound as the SKYACTIV-G 2.0-litre four cylinder engine fires up. Miatas have always provided drivers with great ergonomics and seating position, and this one is no different. The hood is lower than before, so all you see are the creased ridges flaring up on either side. The wheel, shifter and pedals are situated where it feels perfect when your hands and feet are at the ready.
A lot of naysayers say, “Oh, well it’s only got 155 horsepower.” And yes, that’s true. Let’s not forget that Mazda has managed to drop about 68 kilograms of weight, making it only about 83 kg heavier than the first gen. The motor is situated lower and deeper in the engine bay, giving the car an uncanny feeling of balance when you’re pivoting the car around corners. The ND begs to be revved up and tossed around. It’s not a loud car, but the high-pitched whine of the engine is paired perfectly to rapidly rising rpms, peaking at 6,000. And no matter how much I wringed it out in city or on long stretches of highway, the fuel consumption never crept past 9.3 L/100 km. The suspension set up is familiar: double wishbone front and rear multi-link that is smooth and always surefooted.
The 2016 Mazda MX-5 comes standard with air conditioning, LED headlights with automatic levelling/LED combination taillights, Bluetooth connectivity and USB input, and either a six-speed manual or automatic with paddle shifters. The base GX trim starts at $31,900, and the grade-topping GT with leather, Bose premium audio system and heated exterior mirrors is priced at $39,200.