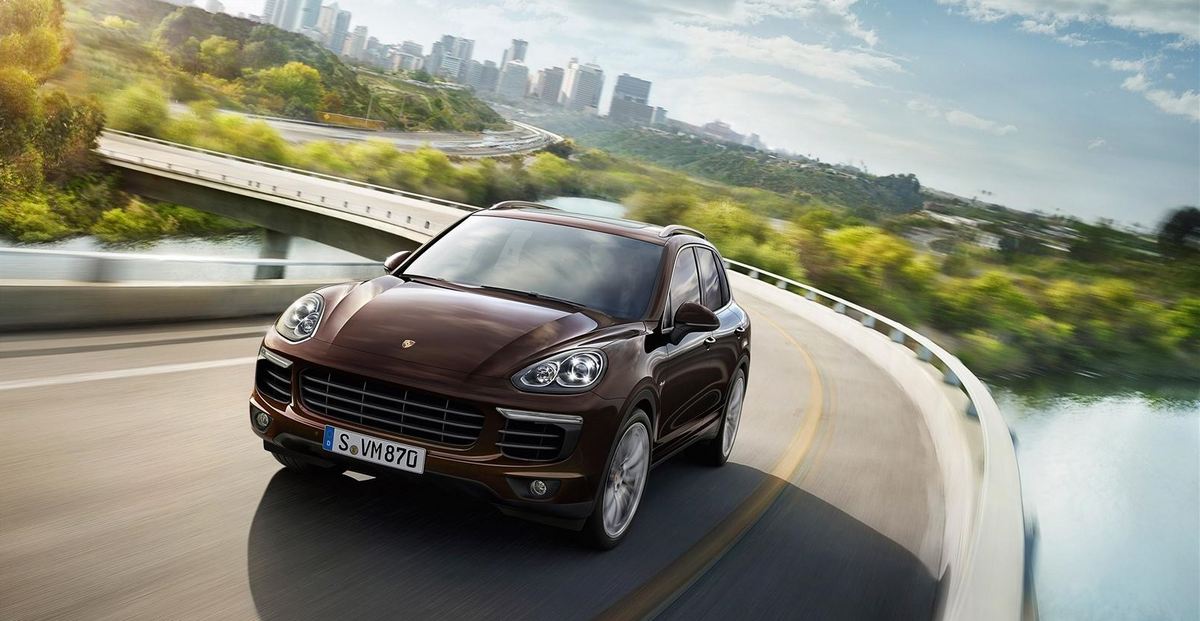 by: Benjamin Yong
With new variants seemingly getting added to the North American lineup every year, like the plug-in SE Hybrid a couple of years ago and most recently the punchy GTS, a bit of the shine may have been taken away from Porsche’s standard V6 Cayenne. I recently had the chance to take the wheel of the company’s gateway-graded SUV to see if it’s still relevant in 2016 — and was surprised at what I found.
Using the term “entry-level” may sound like an oxymoron for any vehicle wearing the crested badge, but as with most luxury marques, almost everything save the steering wheel itself seems to be an add-on padding the MSRP of $67,400. For instance, the sunroof? That’s an extra $1,360. Any exterior colour other than black or white? Another $910. Upgraded BOSE audio? $2,280.
It has been some time since I’ve driven a Porsche where the centre analog clock was a normal clock rather than a stopwatch, as bundled with the optional and performance-boosting Sport Chrono package often installed on the higher trim levels. The base doesn’t really get anything else to help it go faster, as consumers will have to move up to an S model or beyond for that.
The looks department remains largely the same since the crossover entered generation two in 2011, undergoing a complete makeover. Originally introduced in 2002, the Cayenne was met with considerable controversy over the fact that a) Porsche deviated from its traditional sports car recipe and b) it resembled a portly goofy-faced box on wheels.

Among the many enhancements, the body was sharpened and made sleeker all around. At the nose-end, the headlights were reshaped to resemble those found on its siblings such as the 911 and Boxster, and the low and high beam lenses were pushed further apart for more differentiation. The overall vehicle became about 48 millimetres longer providing a leaner silhouette and closer family resemblance.
Higher grades levels like the GTS received a mid-cycle refresh last year lending the Cayenne an even meaner appearance, something the V6 unfortunately has to live without. I actually discovered, particularly in case of the champagne-shade Palladium Metallic paint colour of my press tester, that I didn’t attract an inordinate amount of attention on the road given the brand.
The engineers stretched the wheelbase 41 mm to increase cargo room and rear passenger interior space. Occupants who came along for a ride encountered no issues regarding comfort as the bench seat can slide back-and-forth, as well as recline in three different settings.

The seating position up front is equally as optimal, affording a great view of the road without the associated sensation of opearating a bus as found in other SUVs. In standard Porsche fashion, the key fob — shaped like a miniature P car — is inserted and turned to the left of the steering wheel rather than the conventional right side. I recently learned at a company media event this convention has roots dating back to the early days of 24 Hours of Le Mans, where racers had to run and hop into their vehicles and thus saved time by starting the engine with their left hand while selecting a gear with the right. But I digress.
There’s not a whole lot to report on in terms of powerplant changes for the V6. The 3.6-litre mill makes 300 horsepower @ 6,300 rpm, and 295 lb-ft of torque @ 3,000 rpm, managed via an eight-speed Tiptronic S automatic transmission. The output numbers are a bit deceiving because the crossover moves quite well for its size, capable of going from 0 to 100 km/h in the 7.7 second range and topping out at 230 km/h.
Porsche’s active all-wheel drive system uses an electronically controlled multi-plate clutch geared towards a rear-drive bias, only transferring power to the front when extra grip is required. This both allows a dynamic driving experience and helps to keep the weight down. Along a similar vein, the chassis is now also 145 kilograms lighter compared to before, something that is definitely felt anytime it’s tossed into a corner. I found myself piloting the vehicle more like a 911 than an SUV and it handled all of my aggressive inputs without even so much as a tire squeal.

One additional benefit to being less heavy, of course, is improved fuel economy. Other technologies designed to reduce gas consumption include standard auto engine start/stop and a special coasting feature designed to decouple the motor from the transmission when the driver lets go of the accelerator, letting the Cayenne continue moving under its own momentum instead of being bogged down by engine braking. Working together, I netted an average fuel consumption of 15.3 L/100 km in combined city and highway driving.
So is the V6 version of the manufacturer’s best-selling premium SUV necessary in this day and age? I say indeed, since people can still enjoy the opportunity to own a practical and sporty precision German machine at a much lower price point than a Turbo or GTS model. And when it comes to a Porsche, there’s absolutely nothing wrong with entry-level.