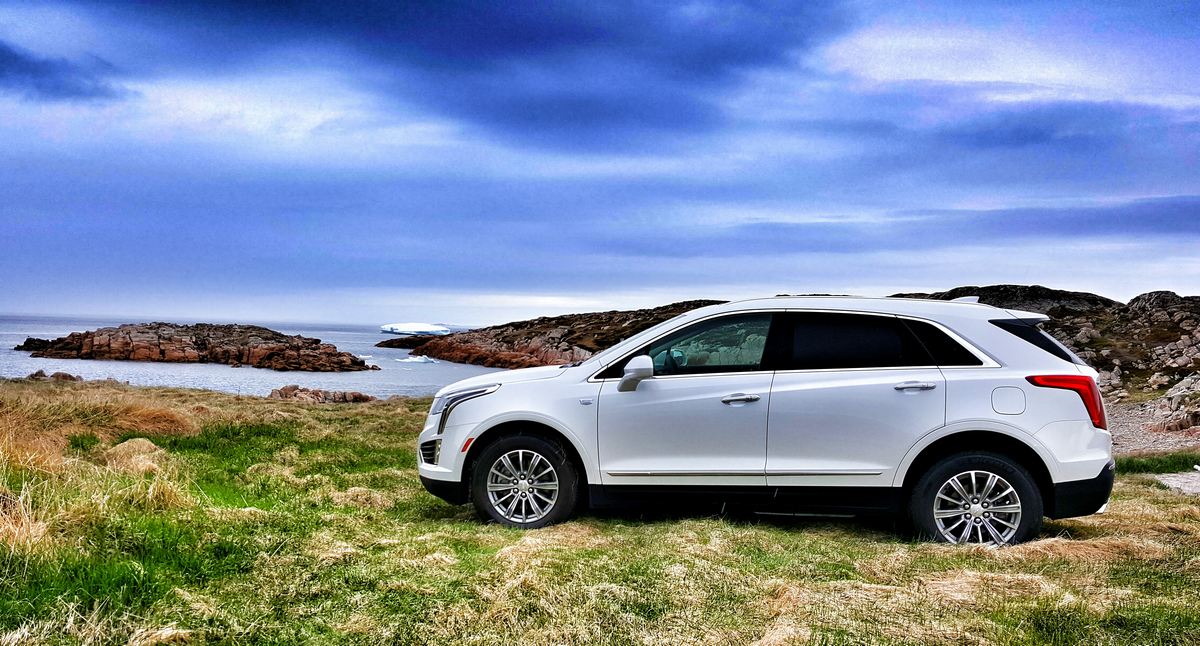 by: Jag Dhatt
Fogo Island, Newfoundland – Many of us look to far-away, exotic places to get away from home for a vacation, when in reality, we don’t have to look any further than our own back yard (yes, that means Canada). There’s so much beauty in places to where few venture and I dare each of you to explore our own country, further than your own province. Thus, when Cadillac Canada invited me to Fogo Island for the launch of the new 2017 XT5, how could I dare say no? I had never been to Newfoundland, so this would be a double win for me.
Fogo Island isn’t an easy place to get to – it took me three flights to reach one of the Eastern most islands of Canada. During the last leg, on a charter flight, the pilot circled over Fogo Island before landing; we thought it was for our viewing enjoyment, but he was actually checking the runway for wildlife. What I saw from the window was an idyllic island, filled with miniature lakes, trails and a few roads. It was serene, waiting to be explored by a lucky few. Awaiting us, as we disembarked the plane, was a crisp northerly wind, and of course, a fleet of new Cadillac XT5’s. The 2017 XT5 replaces the outgoing SRX, with subtle yet noteworthy changes. It’s a great looking Crossover Utility Vehicle (CUV) and in this competitive segment, the XT5 is right on top for design. In keeping with the image of Cadillac, it’s contemporary and stylish, yet has soft edges. I’ve said it before and I’ll say this again: Cadillac’s design team is on it’s A-game and the XT5 follows the same footsteps as the new CTS, ATS, and CT6.
As we loaded our luggage into our assigned CUV and nestled into our seats, the XT5’s interior welcomed us with almost everything that could be asked for in this luxury vehicle. New buyers of a crossover utility vehicle are looking for tech and gadgets, and this new Caddy provides it all. At the centre of the dash sits a beautiful touchscreen that is powered by the newest version of CUE (Cadillac User Experience) software. I’m not a fan of this system; it’s all touch-based and works good, at best. Call me old-fashioned, but give me knobs for the basic controls and I’m happy. Thankfully though, the new CUE is much faster because of an updated processor – it’s the same one found in the new CT6. To make sure we didn’t feel disconnected on Fogo Island, the Cadillac PR team made sure every XT5 on the island had 4G connectivity, and yes, smiles were on all the journalists’ faces.
Driving from the airport to the Fogo Island Inn was almost surreal. Watching movies and TV shows depicting a fishing community do no justice to the sensation of being in the actual area. In one way, you jump almost 30-50 years back in time, thanks to the dirt roads, tranquil communities, and washed colours of buildings. Unlike some of its competition, we immediately noticed that the new XT5 delivered a very comfortable ride and of course, the Cadillac quiet we all come to admire. Even though our test vehicle was fitted with the large 20” wheel and tire package, potholes and road imperfections were easily absorbed. I found the seats to be comfortable yet supportive, great for short and long drives. Normal conversations were a breeze as well, thanks to excellent acoustic and general soundproofing.
As I alluded to before, this Cadillac is filled with technology, and one of the coolest has to be Rear Camera Mirror (only available on the Platinum package), which provides almost 300 degrees of rear viewing. Rather than a conventional rear-view camera, flip a switch and a rear-mounted camera provides a digital image on the rear view mirror. Initially, it’s kind of weird because you don’t see any of the cargo area, headrests, or rear passengers, but after a short time, it’s becomes a marvel. Since it’s a camera on the outside, it will tend to get dirty, especially during spring and fall, but not to worry as there is an autowash system in place, perfect for the Canadian environment.

I had heard about the Fogo Island Inn, an “inn” that has won an accolade of awards. Zita Cobb, a dot.com tech executive, wanted to put the community in which she was raised back on the map. Through her Shorefast Foundation, Cobb built the Fogo Island Inn, a design, environmental and technological wonder, sitting atop the barren rocks of the island. As we crested the hill, what loomed before me was utterly jaw-dropping; and in the foreground, a beautifully staged 2017 XT5. Words cannot do justice to this vantage point, and the folks at Cadillac couldn’t have chosen a more ideal location for the Canadian media drive.

With hotel check-in complete, it was time to head out and explore Fogo Island in the Caddy XT5. Since this was an individual media drive, with no pre-set courses, there were ample opportunities to put the XT5 through the hoops. Fogo Island, as mentioned before, has a mixture of terrain, with mostly single lane and dirt covered roads. We couldn’t really test highway capability, but that wasn’t the point; we were here to discover Fogo Island for its beauty and this 2017 Cadillac made it a breeze.
According to Cadillac’s Bruce Young, the XT5 is 292 pounds lighter than the outgoing SRX and a whopping 650 pounds lighter than a Mercedes-Benz GLE. Said Young, “a mixture of materials was used to reduce mass, yet at the same time, provide better handling and more strength” – and it showed. The XT5 felt solid, strong, without being overbearing.
Since Fogo Island is a haven for photographers, we had to make sure we got some good shots. Trust me, it wasn’t too difficult. But to get the spectacular ones, we had to take the XT5 off-road. With a ground clearance of 7.8” this Caddy took us through some challenging places – at one point, to capture a great shot of this beautiful CUV, we had to park it onto a rocky area. I was sure I was going to bottom out to get to this ledge. But nope, the XT5 climbed gracefully and planted itself with full poise. I was impressed! In another of Fogo’s areas, while driving to get an iceberg as a backdrop, we noticed the grass covered ground becoming soft. Again, our AWD model did not disappoint and we were able to get another great shot. Now, to be honest though, the XT5’s user adjustable AWD system probably won’t match up to that of a Jeep or Range Rover, but for most urban dwellers, it will be good enough. Power for the 2017 Cadillac comes from an all new, naturally aspirated 3.6 liter V6 that provides 310 hp and 271 lb-ft of torque. It’s enough for every day life and should provide enough oomph for most drivers. The engine is mated to a new 8-speed transmission (not ZF) with Electronic Precision Shift, which reduces vibration and allows for smoother shifting. There is also a new Reverse location so that the driver is connected and knows that s/he is putting the XT5 in reverse vs pushing the lever to the old location. The 2017 XT5 is loaded with all the usual safety features that one expects in a luxury CUV. One noteworthy mention, that should be standard in all vehicles, is if the driver leaves the XT5 while the transmission is engaged, the vehicle will stop. I don’t see a scenario like this happening much, but when it does, this safety feature could avoid a potential accident.
After a full day of driving through beautiful Fogo Island, it was time to head back to the Inn for some R&R and dinner. The best aspect of the 2017 XT5 is definitely its demeanour. After all, it is a Cadillac. Simply get it, close the door, and enjoy the vehicle because it boasts luxury. The 2017 Cadillac XT5 starts at $45,100. My choice would definitely be the fully-loaded Platinum, priced at $68, 595 but the best seller will most likely be the Premium Luxury package at $59, 830.
As I sat in my room at the Fogo Island Inn, enjoying the view of icebergs floating by in the North Atlantic, it was obvious why the 2017 Cadillac XT5 felt at place on this island, a place even Hollywood A-lister Gwyneth Paltrow called ‘heaven’. The vehicle holds the classic heritage of the Cadillac brand, much like Fogo Island itself. At the same time, it’s new and daring, like the Fogo Island Inn, waiting for people come and discover. As I sipped my tea, I just enjoyed the best of both, the new and the old.