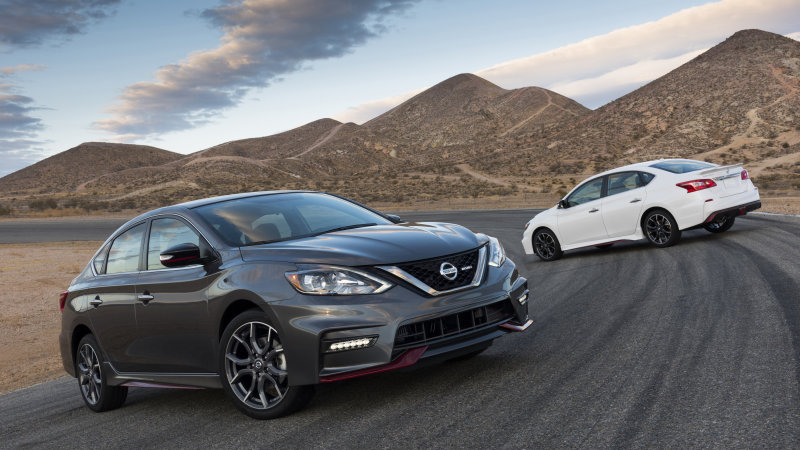 Nissan today kicked off its slate of new product debuts at the Los Angeles Auto Show with a preview of the new 2017 Nissan Sentra NISMO in downtown Los Angeles. The off-site event displayed the latest member of the motorsports-inspired NISMO lineup against a backdrop of classic Nissan and Datsun performance vehicles and where it is most at home – on the street. Tomorrow Nissan moves into the Los Angeles Convention Center for an action-packed reveal of the new Nissan Rogue: Rogue One Star Wars Limited Edition model.
“For 2017, we’re bringing new excitement to Sentra with the Sentra NISMO, which brings driving enthusiasts aftermarket tuner-style performance straight from the factory,” said Bert Books, senior manager, Product Planning, Nissan Canada Inc.
At the heart of the new Sentra NISMO is a 1.6-litre Direct Injection Gasoline (DIGÔ) turbocharged engine rated at 188 horsepower and 177 lb-ft of torque. The engine is matched with choice of a 6-speed manual transmission, with gear ratios selected to take maximum advantage of the engine’s powerband and torque curve, or an advanced, tuned Xtronic transmission. “It’s important to offer a 6-speed manual transmission with the new Sentra NISMO, both to reinforce its pure performance credentials and to up the direct engagement factor between driver and the vehicle,” added Brooks.
In addition to the new Sentra NISMO, the 2017 Sentra is offered in four other grade levels: Sentra S, SV, SR Turbo and SL. For full information on Sentra NISMO and the entire Sentra lineup, please visit NissanNews.com.
The new Sentra NISMO, 2017 Versa Note, 2017 JUKE Black Pearl Edition and Nissan Rogue: Rogue One Star Wars Limited Edition – along with the complete Nissan model lineup – will be on display at the show in the Nissan exhibit, which is located in the West Hall of the Los Angeles Convention Center. The 2016 Los Angeles Auto Show runs from Friday, Nov. 18th through Sunday, Nov. 27th.