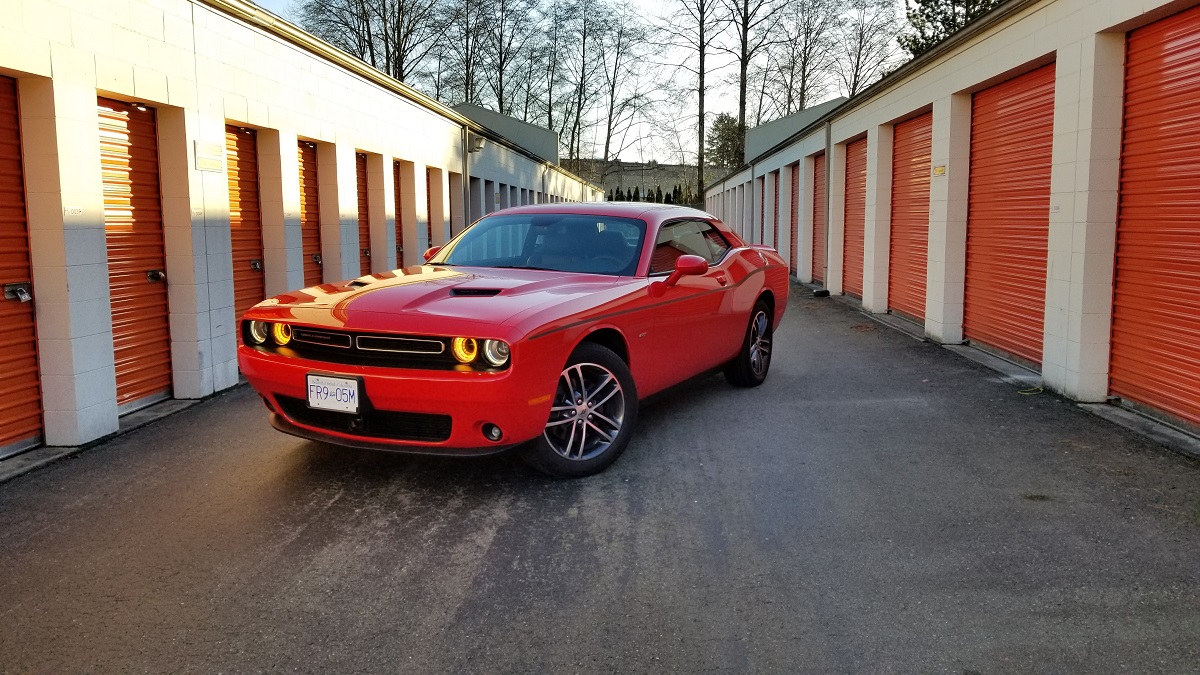 By: Jag Dhatt
When I was told that a new Dodge Challenger was going to be added to the Vancouver fleet, I was ecstatic. “Yes! About time.” You see, us West Coasters sometimes don’t have the privilege to get behind some of the…how do I say this…more sought-after cars, because they just aren’t available as often here. So, this was definitely going to be a treat.
And then I read the email carefully. 2018 Dodge Challenger GT AWD. Sigh. Before I go on, let me explain the feeling. It wasn’t so much the car, but more that the image and perception of the muscle car was changing. Muscle cars were rear wheel drive, straight runners with growling V8’s and usually, two doors. Now, Dodge wasn’t the first to break away from the pack of brute V8 power– both Ford and Chevy had done it, with the Mustang and Camaro respectively. Now, the last of Big Three was joining the others. At first look, the Challenger GT looks like any other Challenger equipped with a big-block, but not quite. Something is different. Yes, it still is a muscle car, but looks like it’s sitting a couple of inches higher. What does that mean? Well, I’ve got to be brutally honest in that it makes the car look odd, from many angles. But the extra ground clearance was a necessity to handle the all-wheel drive system. Add in the skinny 235mm tires and you now get what I’m talking about. Many people who saw the GT probably didn’t know the difference, no matter how subtle. To them, it was still a handsome muscle car.
Saying that the Challenger is a big car on the inside is an understatement. All passengers are comfortable, even in the back seat. I remember sitting in the back seat of a new Mustang and dreading the 30-minute ride – the roofline comes down, way down. Sitting in the back seat of the Challenger was pretty comfortable in comparison. Front passengers enjoy almost recliner-sized heated seats. The GT also features a large 8.4” touchscreen that controls (almost) everything, from audio and navigation to climate and settings. While it’s handy for most aspects, I still wish that the controls for heated seats and steering wheel were done by separate buttons. The UConnect interface is bullet-proof and fast. It just works and puts some systems in luxury cars to shame. Just a few days ago, I was driving a brand-new luxury coupe and it was frustrating that the infotainment system was not only sluggish, but also froze a couple of times. Ugh. Getting back to UConnect, it also supports Android Auto and Apple CarPlay.
Before moving on to how this muscle car drives, I do need to mention the trunk. Like the rest of the car, it’s huge and can carry a family of four’s full luggage for a long weekend trip. Definitely fits the category of a Grand Tourer with almost 460 L of usable cargo space. The Mustang has less and the Camaro, way less. It’s a shame that during my week with the car, the Vancouver area received only a sprinkle of snow, with the rest being either rain or drizzle. However, not to be thwarted in my quest to drive this car in the snow, I made my way to the Fraser Valley where there’s usually a good amount of white stuff on the ground. Onwards I went. For anyone who might think that the Challenger GT’s V6 is mediocre, think again. It has 305hp, which is more than what the V8 equipped Mustang put out about 10 years ago. Yes, it might not be an apples to apples comparison, but it still blurs the lines of how much power can come from a muscle car. On the highway, the V6 provided ample power; nope, it wasn’t the same as an RT or SRT, but it’s not supposed to be. FCA wasn’t targeting this Challenger towards the same buying group that would opt for the bigger engine, nor should they. The one thing really missing is the tone of the exhaust. It’s muted and no matter that it’s not a V8, the designers should have at least amped some sound into the cabin just for the feeling. The Challenger GT isn’t the fastest off the line if you compare it to other small engine “muscle cars” like the EcoBoost Mustang. But once the car gets going, it’s surprisingly good. You have to remember it’s a lot heavier than the Mustang, thus resulting in 0 – 100 km/h run time of about 6.4 seconds compared to the Mustang’s 5.8 seconds. But, the Mustang doesn’t have an AWD system, so pick your poison.
From a realistic approach, the Challenger GT did everything right on my drive from Coquitlam to Abbotsford via the Trans-Canada Highway. Merging on to the highway, passing cars, and even those quick floors of the throttle provided the necessary “thrills” that most would expect from this car. It was more than I expected.
Close to the Abbotsford airport, a friend of mine has some nice acreage, with quite a bit of it being paved. After a quick chat and a cup of Indian tea, it was on to the pavement for some AWD winter fun. Remembering that the Challenger GT is heavy, I took it easy on the snow-covered lot. Hmmmm…not bad at all. Slowly increasing my speed while throwing the car around proved to be quite fun; more importantly, the car reacted very nicely. On dry pavement, all powered goes to the rear wheels. However, when there is slippage, the AWD system performs almost perfectly, with about 38% of the power transferred to the front wheels. And remember the extra clearance that makes the car look somewhat odd? Well, in such situations as snow covered roads, it comes in quite handy. After about a half hour of fun in the snow, I came to a conclusion: the Challenger GT AWD does everything you want from a tamed-down version of a classic American muscle car. And that AWD system, which is the same one found in the Charger and Chrysler 300, works flawlessly.
During the drive home, back on regular damp roads, I began to appreciate the appeal of the Challenger GT AWD. Yes, it still has the iconic name and muscle car looks. But now, it’s fitted with a V6 and can be driven in conditions that you wouldn’t dare take a regular muscle car. The world is a-changing and anytime something radical occurs, there’s always some backlash. Sure, the true muscle car fanatic will frown at this GT. But FCA is providing certain buyers with an optional muscle car that can be driven year-round while still retaining a classic look. I welcome such a change, as do many others.