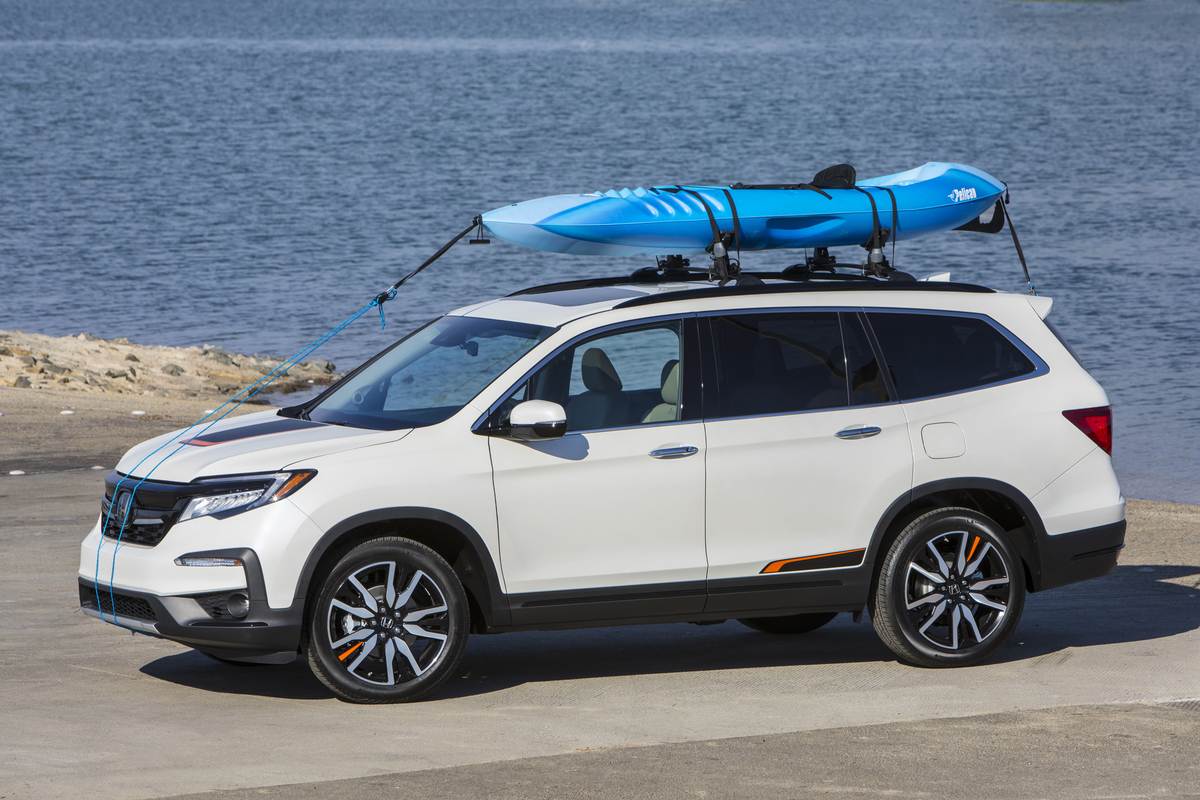 By: Jag Dhatt
The Pilot has been an important product in Honda’s lineup. The previous generation Pilot sold like hotcakes and for good reason. It looked good, had Honda’s legendary reliability, and offered a shape that maximized interior passenger and cargo room. In 2016, the Pilot had a drastic change – in a sense, everything was new. Initially, you either liked the new shape and interior or you didn’t. What was surprising is that most people who had the previous generation Pilot didn’t want to trade theirs in.
A couple of weeks ago, we had the chance to test drive the new 2019 Honda Pilot Touring edition. Let’s see why you should buy or pass on the Pilot.

Legendary Honda Quality and Build
Honda has to be doing something right for building vehicles that not only last, but last for a long time. They age well and owners have little to worry about. The 2019 Pilot continues with Honda’s heritage. It uses top notch materials in both its structure and interior, and fit and finish is excellent. Speaking of the interior, the seats are comfortable and there is ample leg, shoulder and head room in the front two rows. The third row is still surprisingly roomy, but is better suited for youngsters. Overall, the interior is roomy, yet all controls are easily within reach. Finally, the Pilot features two glass roofs; the usual small one at the front and now, a larger panel roof for rear passengers, complete with an electric sunshade. A Great Engine & Improved Transmission
Regardless of trim, all Pilots are powered by the 3.5L V6 that has 280 horsepower and 262 lb-ft of torque. Honda has built engines that power Formula 1 cars, so we know that the engines in their passenger vehicles will be great, and this 3.5L is just that. The biggest improvement, thankfully, has to be with the transmission. If you opt for the Touring or Elite trims, there’s a new nine-speed transmission. For every trim below, you’ll still get the six-speed. I think that Honda should have put the nine-speed in all trims. I drove the Touring trim and found the new transmission to shift smoothly and at the right rpm range. Yes, if you’re not aggressive, the transmission will always search for a higher gear to optimize fuel economy. If you want to hold the shifts for a little longer, use Sport Mode, where the paddle shifters become useful.
Finally, the Pilot features an auto start/stop technology. Once the engine warms up, it shuts off at stops when the brake pedal is pressed fully. Although this feature works well, it’s not as smooth as what you’d find in some GMC models.
A Great Drive
I’ve owned three Honda vehicles and two Honda motorcycles and I can say that they’ve all driven like a dream. This Pilot is no different. Whether in town or on the highway, the Pilot drives smoothly and is predictable. There is enough power to handle most jobs, whether carrying 5 passengers or 7, with cargo. With the new nine-speed in the Touring edition and a slightly tweaked motor, stomping on the gas gets the Pilot going pretty quickly.
Taking corners or going along windy roads builds good confidence in even a novice driver. Again, the Pilot is predictable and if you’ve had Honda vehicles before, you know what I mean. There is some body roll but remember that this is a big vehicle. Even while I took some aggressive corners, the occupants remained calm and firmly planted in their seats.
Lots of Space
Yes, even though the Honda Pilot is considered mid-size, it’s still a pretty large vehicle. There is a lot of room for occupants and cargo, or a combination of both. The second-row seats can be folded easily and the cargo area can be configured to suit personal needs. Speaking of the second-row seats, they are one of the easiest to fold, right next to what you’d find in the Infiniti QX60 or Nissan Pathfinder. And with both the second and third rows folded, there is a tonne of space to carry cargo. In fact, you can even sleep in the cargo area if needed.
And for those who have children, you’ll find that there are a plethora of storage spaces to store all of their toys, stuffed animals and electronic gadgets. Loaded with Technology
Honda has been testing new technology and setups in their vehicles, some that have been good while others, meh. For example, when Honda got rid of the volume knob in their infotainment system, most people complained, me included. You’ll be happy to know that the 2019 Pilot has a volume knob, although I’d also like a tuning knob because, call me old fashioned, but it’s much easier to tune to your radio station using a knob vs pushing a digital button. Moving on, the Pilot has all the safety and driver assistance features that you’d expect. What is new is CabinTalk, in which the driver can speak to all occupants as the voice is delivered through the vehicle’s speaker system. There’s also Android Auto and Apple CarPlay, both of which work well. Our Touring edition also included a rear entertainment system, a must if you have kids or take long road trips.

Honestly speaking, there isn’t a lot to knock on the 2019 Honda Pilot. It’s practical and does everything you’d want it to, and you’re getting a great Honda product at a good price. If we had to be picky, here are a couple of things.
Infotainment System
I think that Honda could build a better infotainment system. I’m not saying it’s bad, but it’s still not intuitive to set presets or tune to a specific radio station. Also, a couple of times, smart phone pairing wasn’t seamless and there were some glitches. Styling
I alluded to this at the beginning of the story – when the new body style was revealed a few years ago, it was a drastic change from the outgoing model. The 2019 model year features some nice changes to the front grille and headlamps. I wasn’t a fan of the new body style, but I have to admit that over time, it’s grown on me. When you build something well, it has a huge impact and the Pilot is another example of a great Honda product that you cannot go wrong with.
The 2019 Honda Pilot is a solid, well-built and reliable SUV that delivers on all of Honda’s promises. In my week with the vehicle, I enjoyed driving the Pilot every single day. And how good did my kids think it was? Well, if it means anything, all of my kids now want me to trade in our vehicle for the new Pilot. It’s a win for Honda.