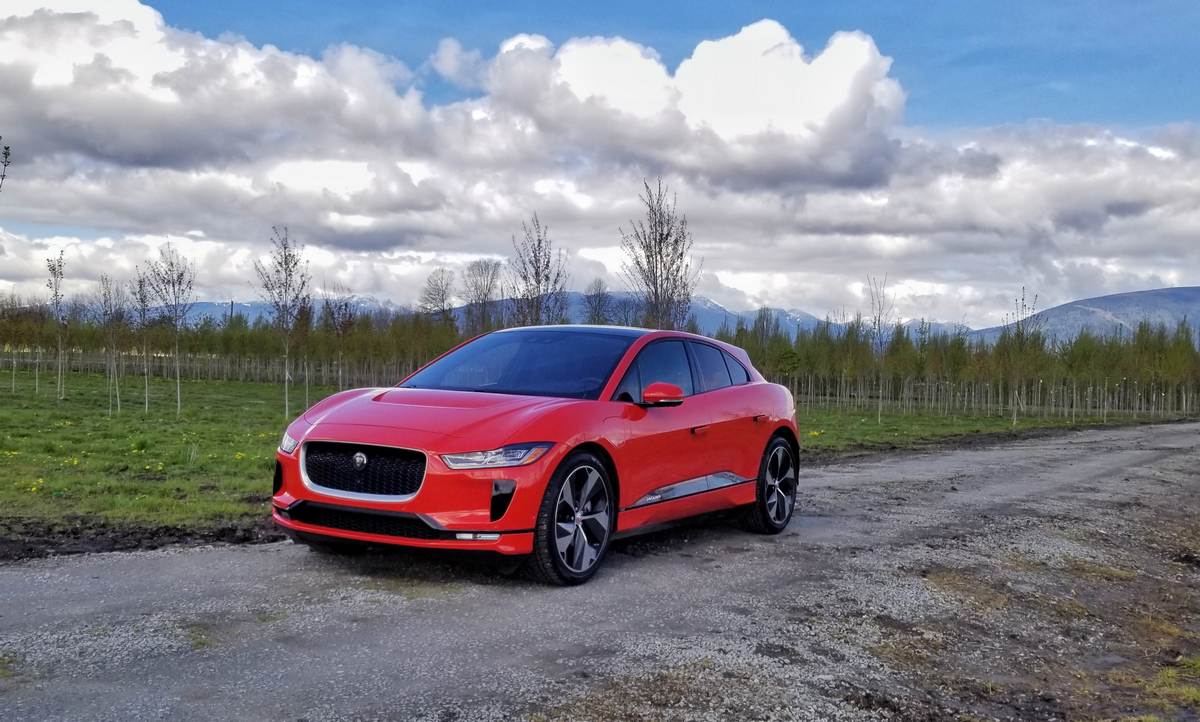 By: Jag Dhatt
With petrol prices going through the roof, well for us here on the West Coast anyways, there’s been a huge push for consumers to look at alternate fuel sources. Who can afford gas at $1.72/liter? And pundits expect this number to be even higher by summer time? Before, a hybrid or electric vehicle was seen as an option, as most didn’t think the initial higher cost off-set the benefits. Now, we’re seeing much higher numbers of hybrid and electric car sales. Even a cousin of mine who never thought he would buy an electric vehicle picked one up a few days ago, something that surprised even me.
With Tesla being the most popular luxury electric car maker, it was only time before another manufacturer made its presence; lo and behold, the new Jaguar I-Pace. And from the week that I had behind of the wheel of this new Jag, Tesla had better be worried, especially since the I-Pace also won the World Car of the Year Award at the 2019 New York International Auto Show. Looks:
Yes, both the Tesla Model S and X are good looking cars, but the Jaguar I-Pace is equally so, but definitely bolder, and it turns heads. Everywhere I went or parked the I-Pace, people were curious and wanted to know more about it. The I-Pace is definitely not your average looking vehicle: it’s a great blend of an SUV and sports car. The curves and lines reflect the forward-thinking design elements that Jaguar wants to infuse into its products. It’s a vehicle that has a unique design and can be spotted from a mile away.
The I-Pace is wide and low to the ground (even though ours came with air suspension) and is perfect for the image of Jaguar; a stealthy animal ready to pounce. And pounce it does when necessary, something we’ll get to later. Interior:
If the Jaguar I-Pace looks good on the outside, you’ll be even more wow’ed by the interior. Let’s first talk about the electronics. As Land Rover has done in some of vehicles, the I-Pace is dominated by screens, which control most aspects of the car. At the center of the dash sits the brand-new dual screens. The top 10” screen serves as the main infotainment screen while the smaller lower screen controls the HVAC system; however, the lower screen can also show other information, such as multimedia settings and such. There are two knobs for the control settings and once you master them, it’s a breeze to use. Push down on these buttons for temperature settings and push down again to control seat heat/ventilation.
As in most luxury vehicles, there are no gauges, all being replaced by a customizable digital display. One thing I’ve noted before and it’s worth mentioning again – I’m surprised that with Jaguar Land Rover being one of the biggest luxury brands, their infotainment and digital systems are disappointing. Not only are they slow, but have glitches quite often. In addition, Bluetooth also falls below expectations, with listeners always complaining of excessive noise. Compare that to a drop-top Mercedes, in which I had long conversations using Bluetooth, with the person on the other side not realizing the top was down. The seats, materials, and fit and finish of the vehicle is as expected, very good. What was more surprising is that interior space is more than you’d expect. The silhouette of the vehicle makes the interior seem small, but with the battery pack in the floor, there is ample room in the I-Pace for 5 adults. And the roof line of the I-Pace is almost one huge glass panel, complete with a solar coating, that lets light in but keeps heat out. More important, the glass roof makes the interior feel very airy and open. The Drive:
So, let’s get to the meat of the story – the drive of the I-Pace. For 2019, there is only one powertrain available, a 90kWh battery pack. To most, this doesn’t mean much. What does matter is that, according to JLR, this Jaguar should get about 377 kilometers on a single charge. And as we all know, the projected range is usually not the real-world range, but we’ll get to that later too.
The I-Pace has two Jaguar-developed electric motors that develop 197 hp and 256 lb-ft. of torque at each axle (for a total of 394 hp and 512 lb-ft of torque). This Jaguar is ready to pounce, and pounce is does; you can get from 0 – 100 km/h in just 4.8 seconds. That’s pretty quick considering this is a heavy SUV. What impresses most is how immediate, and quiet, power delivery is. Yes, it’s an EV and thus, acceleration is instantaneous, but even so, it amazes people. With power like this, you wonder what you’re missing from a V8. Well, if we’re getting into this, it’s the growl of a V8. With the Jaguar I-Pace, you get a slight hum from the engine; however, when in Dynamic mode, there is a slight growl. It’s no V8, actually not even a 4-cylinder growl, but it is an EV! And yes, all the sound is artificially piped into the vehicle. Driving the I-Pace around town is an experience in itself. The vehicle is nimble and incredibly easy to navigate even through the tightest corners. Onboard cameras help of course.
On the highway is where the I-Pace really shines. It’s stable and predictable, and steering is spot on. What’s more, even when going at 100 km/h, if you step on the accelerator, the I-Pace jumps and takes off. It is fast!
I also had the opportunity to drive the Jag on gravel roads. Now, one might think that the car wouldn’t be suited for such terrain, but not so. Even on loose gravel roads, the I-Pace shone, proving itself to be stable and providing a ride that was still very comfortable. And since it has AWD, I’m sure it would perform well in all seasons.

One point that needs to be mentioned is that the I-Pace learns your driving manners. The vehicle’s artificial intelligence system monitors driving habits, methods, etc. and learns, displays and adjusts the vehicle to match driver habits. It’s cool actually, especially when you approach the vehicle and it sets temperature, seating position and even audio presets based on what it’s learned.
The Range:
Jaguar claims that the I-Pace will get about 377 km on a full charge, UNDER IDEAL SITUATIONS. After a week with the car, I can tell you that it didn’t even come close. I averaged about 300 km under normal conditions. Is this bad? Not really. But you have to remember that the vehicle was new for me, so I was testing everything and I was stomping on the pedal quite often. I think that once I adjusted to the vehicle, and it learned my driving habits, I’d probably get around 320 km. Verdict:
The 2019 Jaguar I-Pace is an impressive vehicle that is poised to take on the flagship Tesla. Yes, this vehicle is aimed at a niche market, especially since our tester was priced over $100, 000. But it is worth the price considering what you’re getting. Compared to the Tesla Model X, it’s about $80,000 cheaper than a similarly loaded and powered Model X. So, in that respect, it’s quite a bargain.
There is a surge of electric vehicles on the horizon and for good reason. With gas prices going through the roof, alternate fuel sources need to happen. The Jaguar I-Pace is an impressive, stylish luxury EV that puts a smile on your face every time you pass a gas station.
Specs:
Body Style: Compact crossover
Engine: 90 kWh battery
Power: two 150 kW electric motors
Horsepower: 394
Torque: 512 lb-ft
Transmission: 1-speed
Base Price: $86, 500
Price as tested: $103, 500