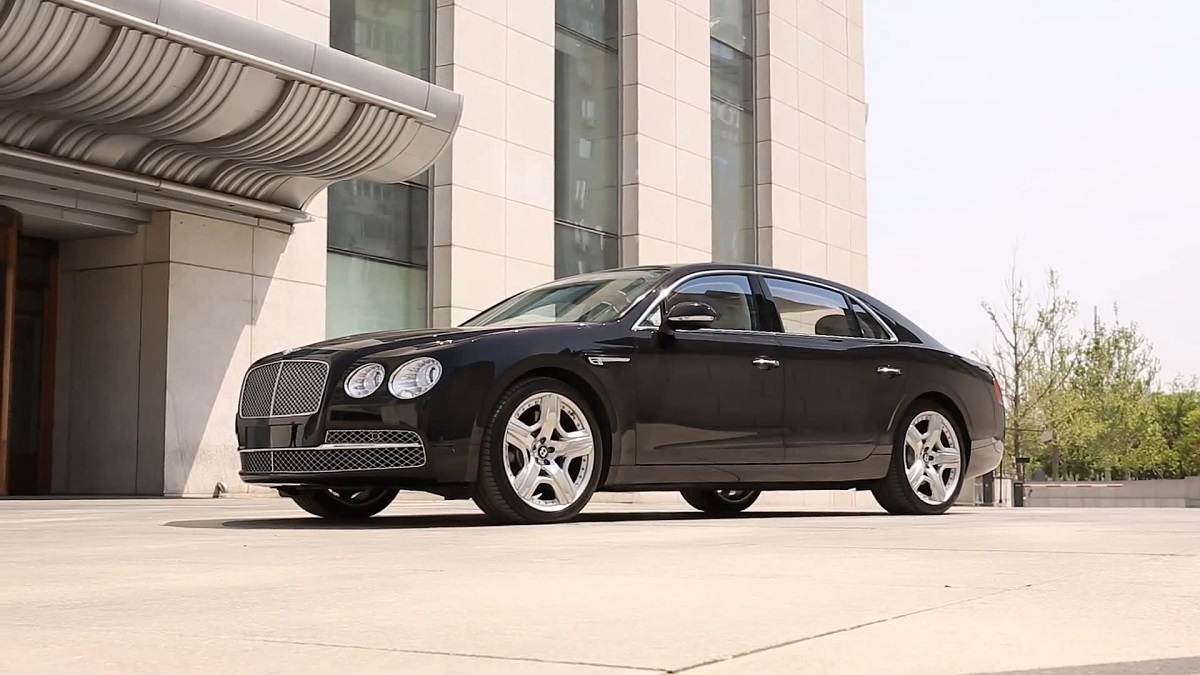 You don’t have to be born with a silver spoon in your mouth to know that Bentley builds some of the most incredibly fine automobiles on the planet. For the one percent of people who are considered “ultra-wealthy,” the 2014 Flying Spur is a vehicle that delivers uncompromised four-door luxury, unbridled performance, and a lifestyle that most only dream about.
As an auto journalist, I’ve been blessed to have the opportunity to drive some of the most luxurious and prestigious cars built. For the week that I enjoyed this 2014 Bentley W12, I pretended that my pockets were deep, just to see if the Flying Spur would keep its promise as being one of the best. At one point, I almost thought of hiring a “Jeeves” just to have the full experience.
What can one say about the styling of the 2014 Flying Spur other than it’s beautiful. At the front, the signature mesh Bentley grille and fascia are lower and more upright as compared to earlier models, now more similar to the Mulsanne. Coupled with the quad headlight visage, complete with circular LED’s, Bentley’s front end is aggressive and bold. What I really like about the style is the wide stance at the rear wheels, which is eloquently achieved by a high character line that runs from the rear doors to the trunk lid.

The car has a tastefully muscular stance that others have tried to match, but none have perfected. My Flying Spur…wow, I like the sound of that actually…oops, back to reality, was fitted with the optional 21” Mulliner wheels, completing the overall look. Body panels are made of aluminum and composite, offering substantial weight savings. Then there’s the colour, Hallmark. Initially, the colour is one that I would probably never choose, but the more I looked at it, the better it looked each time. What’s more is that I don’t think this colour would look nice on any other car, other than a Bentley. Oh and by the way, you can order your Flying Spur in almost any colour of choice.
The cabin of the car is lavish, sophisticated, and timeless, as Bentley owners will settle for nothing less. The interior is wrapped in hand-stitched leather, chrome, and lacquered and polished veneer. For the rear passengers, the traditional fold-down tables are kept, in case you need to sign some multi-million dollar deals while being chauffeured to your next meeting. And in case you needed to send or receive important emails, there’s an integrated Wi-Fi hotspot. Since most owners of this Flying Spur will be driven around, rear passengers have access to many of the car’s functions, such as the sound system, navigation, climate control; in fact, they can even check how fast the car’s being driven. Talking about driving, don’t mistake this uber-luxury car to be docile. Even though Bentley decided to drop the Continental name in the new Flying Spur, it’s still a driver’s car. The new 2014 weighs about 120 lbs less than the previous Continental Flying Spur, but it’s still hefty at almost 5, 451 lbs. To get this tank moving, my test Bentley came equipped with its coveted, yet updated, twin-turbo 6.0 liter W12 engine in all its glory (a V8 is now available). Did I mention this W12 engine now develops 616 hp and 590 lb-ft of torque? If you’ve never driven a car with this much torque, it’s like strapping a jetpack to your back and then pressing launch. Yes, it is that fast. Off the line, it pounces to 100 km/h in just 4.6 seconds, by sending power to all four wheels, enough to push your stomach to back of the seat. After the initial launch, the Flying Spur feels like a luxury sedan again, offering acceleration that is so velvety smooth, quiet, and with seamless shifts, that you might even forget you’re moving that fast. Top speed is about 322 km/h, not very practical, but definitely great for bragging rights while enjoying a martini at the local country club. And fuel economy? Well, who cares about fuel economy when you’re driving a Bentley, right?
So how was the car around town? Amazing. Astounding. Remarkable. I had the luxury of driving this car around for a week and I felt like a million bucks. Oops, got side tracked again. Back to the car, ride quality is amazing as is the handling. The Flying Spur has standard air suspension, allowing the driver to lower or raise the car at will. Remember, however, the car will lower automatically as speeds increase. Steering is precise and with this car, feedback from the road is spot on. All controls in the car are within reach so that the driver is always focused on the road and the drive. I had the opportunity to take my wife and kids for a quick spin to Squamish and the car was unbelievably quiet at all speeds. Again, Bentley owners expect this kind of sound dampening. My two girls, who are only 5 and 7, thought the car was “cool” but couldn’t understand why daddy had a big smile plastered on his face the entire time.

Personally speaking, the Flying Spur was an absolute joy, and honour, to drive. I’m a driver at heart so if I owned this car as my personal vehicle, I would want to drive it every day. For the one week, everywhere I went, people’s gaze fell upon the car. They took out their smart phones to take pictures, and so many stopped and asked me questions about the car.  Even when I took the car to a couple of corporate meetings, our clients wanted to talk more about the car than conduct business. That’s the effect a Bentley has on society.
In today’s economy, which has seen many ups and downs, the demand for ultra, high-end luxury cars has not diminished, especially for those who crave prestigious, limited hand-built vehicles. My test Bentley Flying Spur was priced at $325,000, so yes, it’s not budget friendly. But one thing is for sure – for those who enjoy the finer things life, the 2014 Flying Spur does keep its promise as being a collection of everything you could want.