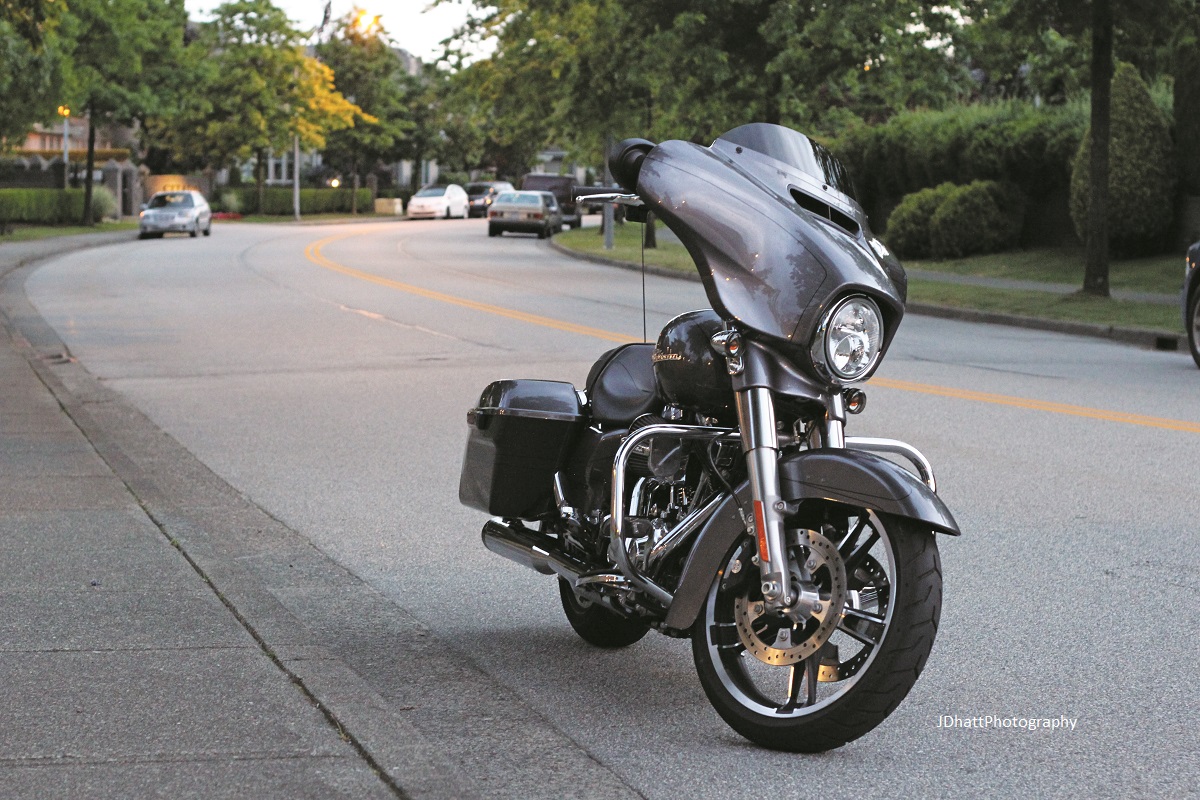 As many of you know, I’ve been riding my share of motorcycles for the past twenty years, ranging from cruisers to track-ready supersports. My last few bikes have been supersports, but I have to be truthful – after riding the new 2014 Street Glide Special for a week, I’m tempted to put away my racing leathers and maybe settle for a more relaxed ride. My test bagger came complete with Stage 1 upgrade and Rinehart Racing pipes.
The Street Glide has been Harley’s perennial best seller for years and according to HD’s President Matt Levatich, “[They] took every dimension of a great motorcycle and made it better.” Levatich is referring to Project Rushmore, which in essence, is a mountain of upgrades and modifications made to 2014 models. Some of the major upgrades include the High Output Twin Cam 103 engine, a highly sophisticated linked ABS system, new adjustable suspension, a new 49 mm fork, an amazing new Infotainment system, and a makeover of the fenders, fairings, and luggage systems. The beauty of Project Rushmore is that the bagger is still recognizable as a pure Harley, but now, it’s packed with modern technology, which makes it just that much better. Coming off of a 750cc supersport, the Harley Davidson is a big big motorcycle – it’s wide, long, and heavy. Initially, I was a little hesitant because the bike was brand new; the Vivid Black paint shining and the chrome gleaming in the sunlight. The Batwing fairing, first introduced in 1969, is menacing and now features an extended brow and forward vent, characteristic of a Rushmore model. The functional splitstream vent now should do a much better job of buffeting the wind, which was a complaint by most FL riders. At the rear of the bike, the saddlebags are sleeker and now feature a one-touch operation, which makes loading and unloading things a breeze.
As I fired up the bike, the Rinehart Racing pipes made their presence felt. As I mentioned in another article, I’m a huge proponent of aftermarket pipes – it’s not to suggest that I encourage noise pollution, but rather, louder pipes make you “seen” on the street more-so than stock pipes. With the bike at idle, there is the traditional shake, but come on, it’s a Harley right. After making sure the mirrors were set, I put the bike into gear, said goodbye to the Harley dealership, and set off.
My first day consisted of local riding, just to get the feel of the Street Glide Special. For being such big bike, I was pleasantly surprised by how easy it was to ride, especially with it being almost twice the weight of a supersport bike. The bike is very smooth and there was no shake at all, with even the mirrors providing clear images of what was beside and behind me.  My tester was also fitted with full-length footboards and a toe-heel shifter, and after a while, I found it easier to shift as compared to the normal single lever shifter. For some reason, the heel-toe shifter took me back to the days of watching Officers “Ponch” and “Baker” on the TV series CHiPS in the 80’s. Hmm…that’s going back quite a bit. Anyhow, as evening approached, I pulled into my driveway, my two daughters jumping with the joy that dad had bought a new motorcycle. Well, I did have it for a week! The next day, I decided to do some longer cruising as that’s what this bike is really built for. It’s worth noting that for 2014, the Street Glide does have a hand-adjustable shock (on one side only), a new hydraulic clutch, and a new 49mm fork, which adds more stiffness to the front and enhances the already solid feel of the bike. The new upgrades are welcome additions, according to most who have ridden the new model.
Pulling out of my neighbourhood and getting closer to the open roads, I was anxious to really test the bike. As I merged onto the freeway, I opened up the throttle and the bike lunged forward. With almost 96 ft-lbs of torque and 76 horsepower from the new 103 V-twin, the Street Glide has plenty of power to cruise and pass at highway speeds. Riding at around 100 km/h and wind buffeting becoming a problem, I opened up the new vents in the Batwing fairing, and even though there is improvement, it’s still there; this is surprising as the same venting on the Electra Glide works wonders. Deciding to head to Chilliwack, I set the cruise control and enjoyed the ride. The wide set handle bars are very comfortable and combined with the ergonomic seat, riding the Street Glide is a joy.
After a quick lunch break, I focused my attention on the brand new Infortaiment system, which puts all the “modern” controls at your fingertips, just like in an automobile. Loaded with Bluetooth technology, 6.5” colour screen, navigation, USB and auxiliary inputs, and housing 5.25” speakers, this is a masterpiece. The entire system is quite easy to use, a big plus when riding on the open roads. I connected my Android phone, chose my 80’s playlist and headed back towards Vancouver. Traveling at around 100 km/h, the 25 watt speakers produced rich and clear sound, even with the minor wind buffeting. After only a short time, I realized that the Infotainment system is must-have for any cruiser. For the next 5 days, I enjoyed riding the 2014 Street Glide Special. Even though there will be some purists who will not like the new Reflex linked ABS system, in which both front and back brakes are linked, the system does work really well. Remember that below 40 km/h, the brakes are electronically de-linked and rider is free to choose the caliper and disc of his or her choosing. Matched with Brembo brakes, the new ABS system allows you to stop on a dime at any time.
The Street Glide hasn’t only been Harley’s, but probably the world’s favourite bagger. The new 2014 model is a great blend of traditional heritage and modern technology and with a starting price of $24, 969, it’s a great bike. I think it’s time I hung up my racing leathers after all.