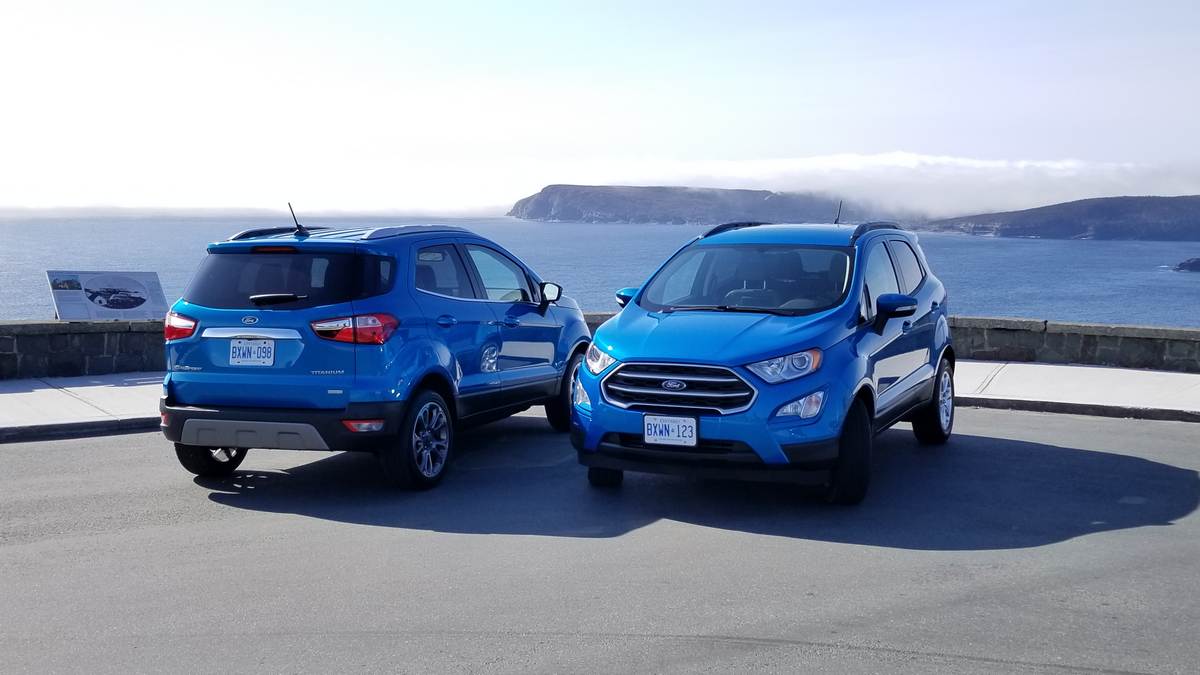 by: Jag Dhatt
St. John’s, NF: I’ve been blessed to have traveled to some pretty amazing places, with many of those being in Canada. The west coast, where I reside, has its own beauty with rising peaks and forests of big oaks. On the other side of this country, there’s Newfoundland, one of the first places in Canada to be discovered by the Vikings hundreds of years ago. This area is serene, peaceful, with rolling hills and views of the Atlantic Ocean fit for any postcard. And it was here that we were invited to test the new 2018 EcoSport (pronounced “echo-sport), Ford’s newest member in the sub-compact SUV lineup.
While the EcoSport is new to our market, it was originally designed for other markets, particularly South America. After 2012, it began to be sold across Asia, Europe, and even Russia; all of these areas love their small cars. And now, it’s here. Let’s face it: the newer trend in North America is towards compact or sub-compact SUV’s. With soaring gas prices, smaller and limited parking spots, and people’s lack of wanting to navigate bigger vehicles in urban areas, the manufacturers are on the right path of providing what’s needed. And the EcoSport is embracing this philosophy, quite literally, and its timing couldn’t be better.
The new EcoSport is small, being almost 17” shorter in length than slightly bigger brother Escape. What’s impressive is that the EcoSport is the smallest of the bunch in this category, by at least half a foot, when compared to the HR-V, Chevy Trax, and even the Jeep Renegade. The EcoSport is a good-looking vehicle, resembling the Escape in many ways. So, if you like the Escape, you’ll appreciate the EcoSport as well. Our test vehicles, both the SE and Platinum trims, were fitted with LED headlights, 17” wheels and some great optional equipment. One thing you’ll find unique in the EcoSport is the tailgate design. Rather than opening up, it opens to the side, so make sure you have enough room in the back to open it. Speaking of the back, cargo area in the EcoSport isn’t bad at almost 600 liters with the rear seats up and over 1,400 liters with the rear seats folded down. While not as much as the HR-V, most buyers of this vehicle won’t be disappointed. Inside the cabin you’ll find classic Ford design carried through. While the materials used aren’t luxury, overall fit and finish is excellent. Both front and rear seats are exceptionally comfortable and supportive, something that I didn’t expect at all. If you’re a taller driver, you’ll have to push your chair quite far back, but that’s a given in most sub-compact vehicles. Rear legroom isn’t much, but headroom is good. While you won’t want to take four adults on a long drive, for a family with younger kids, the EcoSport would work very well.
Ford’s SYNC 3 powers the infotainment system and this system has been reworked from the previous version to be faster and more intuitive. And yes, there are buttons and knobs for many functions and controls! The 8-inch touch screen provides a tonne of information and supports both Android Auto and Apple CarPlay, features that most new buyers want nowadays. And on higher trims, SYNC Connect allows you to have a Wi-Fi hotspot so your passengers can stay connected. During our drive on the beautiful east coast, the roads encountered were both smooth and rough, often filled with potholes. But the variety really allowed me to test the handling, comfort and driving dynamics of the EcoSport.
For a small vehicle with a short wheelbase, the EcoSport’s ride was quite good, surprisingly good. What was even better was the handling and steering. Sitting comfortably in the EcoSport, I was impressed that the vehicle absorbed the imperfections of the road quite well. Since it was great in St. John’s, I’m sure this vehicle will perform just as well in most urban and suburban areas throughout Canada. Steering was equally good, providing spot-on tracking on the windy roads of the east coast. In terms of power, the EcoSport is available with two engine choices and like the vehicle, they’re small: The base is a 1.0L turbocharged inline 3-cylinder that produces 123 horsepower and 125 lb-ft of torque – it’s available in the S, SE and Titanium models. Then there’s the 2.0L naturally aspirated inline 4-cylinder engine that puts out 167 horsepower and 149 lb-ft of torque – it’s standard on the SES and available with four-wheel drive on the other models. Both engines are mated to a 6-speed automatic transmission and the EcoSport is available in both front wheel and 4WD configurations.
While numbers always provide a base, real world driving provides a much better picture of power delivery. Driving through hills, valleys, and some tight roads, I found the power to be adequate. The 1.0L 3-cylinder proved to be punchy but you still had to keep your foot on the throttle most of the time. However, compared to the 2.0L, it was more fun to drive. The 4-cylinder is better suited for highway cruising as it does have some hesitation climbing steep hills. That being said, there aren’t too many big hills in our urban centers. What surprised me most was fuel economy, and not for the better. Even though the engines are small, fuel economy wasn’t that great. I drove both engine variants in the EcoSport, and while we did push the vehicles during the drive, we couldn’t come close to the manufacturer’s average ratings. Good thing only regular 87-octane fuel is required.
The sub-compact SUV segment is becoming more and more competitive with manufacturers delivering vehicles that are more suited to the urban lifestyle. The 2018 Ford EcoSport is a very practical vehicle that offers good styling, impressive driving dynamics, and a very comfortable interior. While it may have a couple of shortcomings, it’s definitely worth a look. Editor’s Note:
While it doesn’t directly relate to the EcoSport, I do have to add that while in our Eastern-most province during this drive event, I became an official Newfoundland Labradorean. To be inducted into this prestigious club, I had to kiss a cod, which I willfully did. Thank you, Ford Canada!