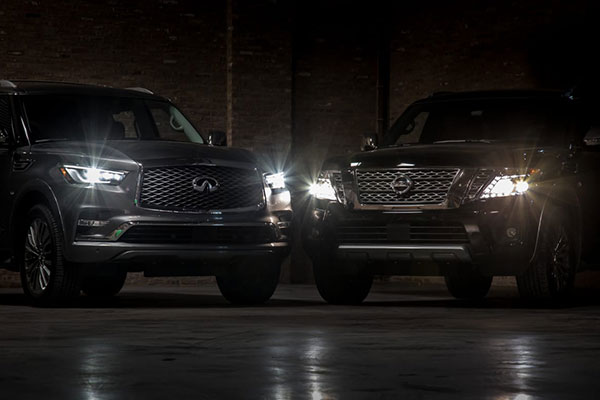 By: Sandeep Gill
There are certain iconic vehicles in the realm of rough country workhorses and people movers that even those uninitiated to the world of cars will recognize, like, the Toyota Land Cruiser, Land Rover Discovery, and Nissan Patrol. Nissan Patrol? What is that? Pretty much anywhere outside of North America the Nissan Patrol is as well-known as those other vehicles. It is the quintessential people mover of armies, the UN and is a staple image for those who watch CNN. But North America’s introduction to the Nissan Patrol did not come with a connection to a tried and tested history going back to the 1950’s, but, rather we were given the Nissan Armada back in 2010. Why Nissan chose to leave behind a history that rivals that of the legendary Land Cruiser I can’t really say. Especially, in Canada, we are so globally diverse that it would have greatly benefited the introduction into this market. That stated the Nissan Armada and sister truck Infiniti QX80 represent fully capable, full size, off-road SUV’s. The 2018 current iterations we have here in the form of the Platinum Reserve and QX80 dressed in Champagne Quartz present future buyers with a conundrum. The two vehicles on paper are essentially identical – the interiors offer plush and opulent surroundings, diamond/double stitched leather, almost every part of the vehicle is covered in this luxurious material (miles of it). They, however, present very differently. The Armada exudes a degree of machismo and bravado that the QX80 lacks. The exterior of the Armada’s lower cladding and wheel arches don a two-tone paint scheme, breaking up the large expansive lines of the SUV. The Reserve edition also changes up the conventional chrome for dark chrome that gives the front fascia of the Armada an almost menacing look. Turn to the QX80 and the lines become softer and the ride more supple and cloud-like due in part to Hydraulic Body Motion Control (HBMC) a system that actively adjusts the suspension to manage body lean and bounce (unique to the QX80). The QX80 pumps out 10 more horsepower from the Endurance 5.6 Liter V8 for 400 bhp and 413 lb-ft of torque giving it an 8500-pound towing capacity. Despite the output differences, the two siblings have equal load capacity. Both vehicles offer intelligent 4×4 with full low range capability. The full-size behemoths return 17.5 and 12.8 City/Highway L/100km. In real-world testing, the 12.8 would be difficult if not impossible to attain and the best I could muster was 16 L/100km. The vehicles comes with a full host of safety technologies including: Predictive Forward Collision Warning (PFCW), Backup Collision Intervention (BCI), Intelligent Cruise Control (ICC) and Distance Control Assist (DCA), Lane Departure Prevention (LDP), Lane Departure Warning (LDW), Blind Spot Intervention (BSI) and Blind Spot Warning (BSW). The test vehicles also included an Intelligent Rear-view Mirror (essentially a system that replaces the rearview mirror with a full-time camera system). This is a unique twist on the rearview mirror that allows one to overcome situations when the mirror may be blocked by occupants or payload. That stated given the ultra-luxury segment these vehicles occupy the safety and convenience features are a bit long in the tooth and lack features like park assist and semi-autonomous autopilot. The occupants have access to full multimedia entertainment including second optional third row DVD, 8-inch main screen all pumped through 13 impeccably tuned Bose speakers. Despite what people would think as being identical models just rebadged for sister companies the Armada and QX80 have different souls and cater to different crowds. They carry as tested prices of nearly $75,000.00 and $86,000.00 for the Armada and QX80 respectively. They offer levels of refinement unique to the Asian markets and designs that move away from North American cues. The question is do you go with Beauty or the Beast.