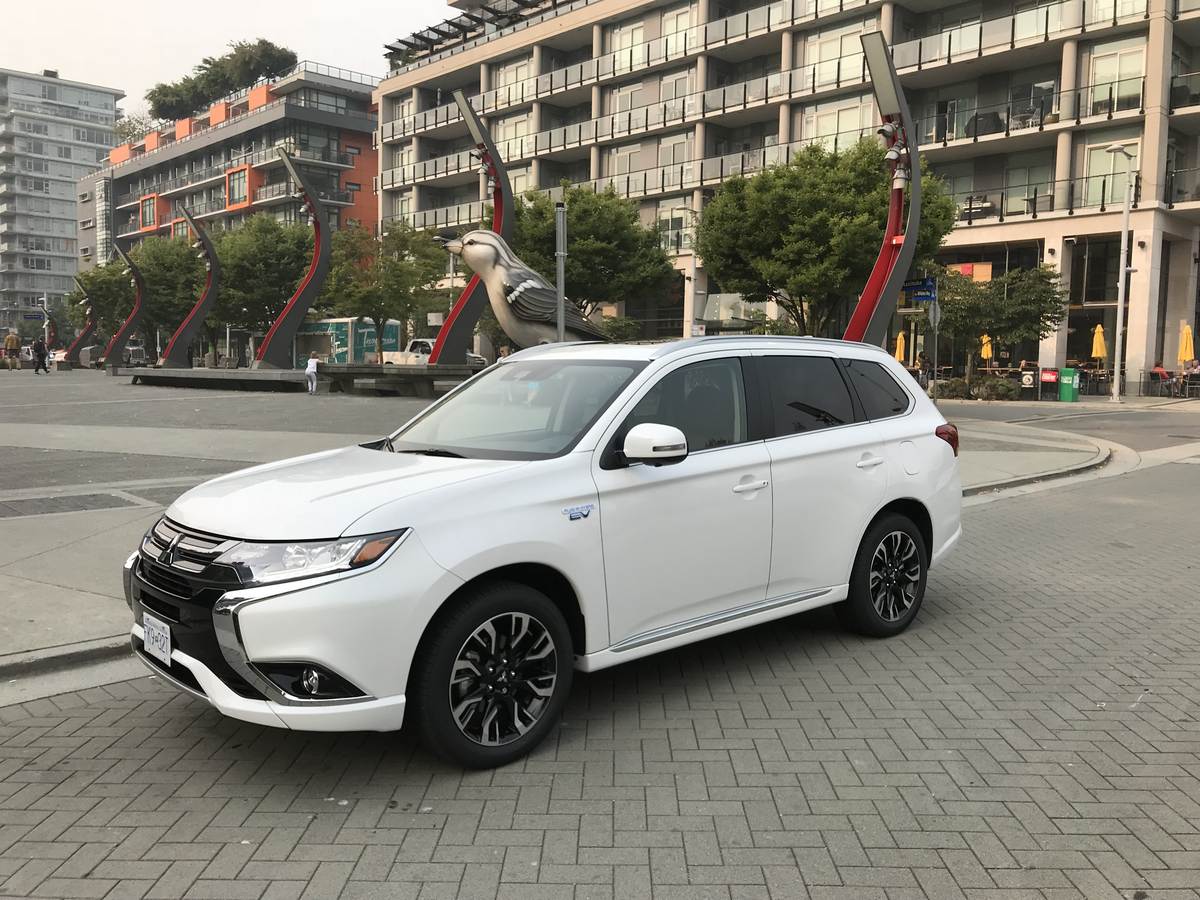 By: Jason Tchir
The Mitsubishi Outlander PHEV doesn’t exactly look like the SUV of the future. It looks like, well, an Outlander. But, since the PHEV came out at the start of the year, Mitsubishi has sold as many of them (more than 4400, as of September as they have regular Outlanders. That’s nearly a quarter of all PHEVs sold in Canada.
The reason might be simple: Canadians like all-wheel-drive SUVs, we hate getting hosed on gas and we still worry about the range of pure electric cars. And maybe, we like the idea of being a little greener without having to give up space, conventional styling and towing (it’s rated for 1,500 pounds). The Outlander PHEV is a plug-in hybrid — with the 12 kWh battery fully charged, you can drive it, mostly, like an electric vehicle for 35 km. But, unless you keep it plugged in in your driveway, your neighbours might not guess that it’s (partly) electric.
The 2018 Outlander PHEV comes in three trims: SE ($42,998 before rebates in B.C. and Quebec), SE Touring ($45,998) and the GT ($49,998). It’s the cheapest all-wheel-drive plug-in hybrid SUV right now, beating rivals like the BMW X5 (starting at $74,950), Porsche Cayenne (starting at $59,900) and Volvo XC60 T8 ($71,850).
It’s also the only PHEV that allows DC fast-charging to get to 80 percent of a full charge in 30 minutes — although, since most fast chargers cost money, will people want to pay to charge? Otherwise, it takes the Outlander PHEV 3.5 hours to charge with a Level 2 charger and 8 hours at a normal 110-volt outlet. We spent a week with the GT. The Outlander has been through a couple of facelifts since it was introduced in 2013, and its looks are still handsome — if a little generic. It’s still a little boxier than some newer rivals — if one of the Autobots had been a family SUV, would have looked like the Outlander.
Sitting in the driver’s seat, the first thing you notice is the space — and the visibility. It could be the roomy front seat of a minivan. The seats are comfortable. The back has enough space for three adults, but, unlike the regular Outlander, there’s no third row.
The interior feels slightly dated and not as high-tech or luxurious as some rivals, But it’s still well equipped — the base SE blind spot warning, rear cross traffic alert, heated front seats, a 7-inch screen with Android Auto and Apple CarPlay and dual-zone automatic climate control. With the GT, you get goodies including leather, lane departure warning, adaptive control cruise control, power tailgate and a 710-watt stereo with an almost-comically giant subwoofer. There are no rear seat vents, which you might expect in a nearly-$50,000 SUV — but overall, you get plenty for the money.
Inside, there are a few clues that it’s part-electric. Instead of the normal Outlander’s shifter, there’s a joystick to shift the gears. And there are three buttons — EV, Charge and Save. They do, well, what they say. EV puts it in EV priority mode, so it will stay purely-electric unless you hit the gas pedal hard. Charge uses the engine to charge the battery up to 80 percent. And save, well, saves the battery — it will use mostly gas. The paddle shifters control the regenerative braking — which charges the battery as the car slows down. If you haven’t driven an electric car before, it can be a little startling — but, depending on the level, taking your foot off the gas slows the car down. Even with it set on full, you don’t get one-pedal driving — you’ll need to hit the brakes to stop.
The Outlander PHEV has a 117-hp, 2.0-litre four-cylinder engine. Dual electric motors at the front and rear add another 180 hp. The transmission is a CVT. With the electric motors, you get instant torque from a dead stop, which makes it seem especially peppy. It’s not sporty and isn’t going to wow you with power — but it held its own on the Sea to Sky highway, even though it leaned a little on curves. There’s a 4WD Lock button to simulate a locked differential for extra traction on an unploughed winter road — but, like Tesla’s, the AWD system actually relies on the electric motors.
It officially gets 9.4 litres per 100 km in the city and 9.0 on the highway (9.2 combined). The four-cylinder gasoline-only Outlander gets 9.9 city and 8.1 highway (9.4 combined). It doesn’t seem like a huge savings for a hybrid, but if you can plug in the Outlander PHEV at home and work and don’t have a long commute, you could get away with mainly using electrons for daily city driving. Apart from a few quirks — for instance, the gas tank is pressurized and takes a few seconds to open when you flip the switch — the Outlander PHEV’s ordinariness is, well, a little extraordinary. It’s a relatively affordable family SUV that happens to be a little electric.