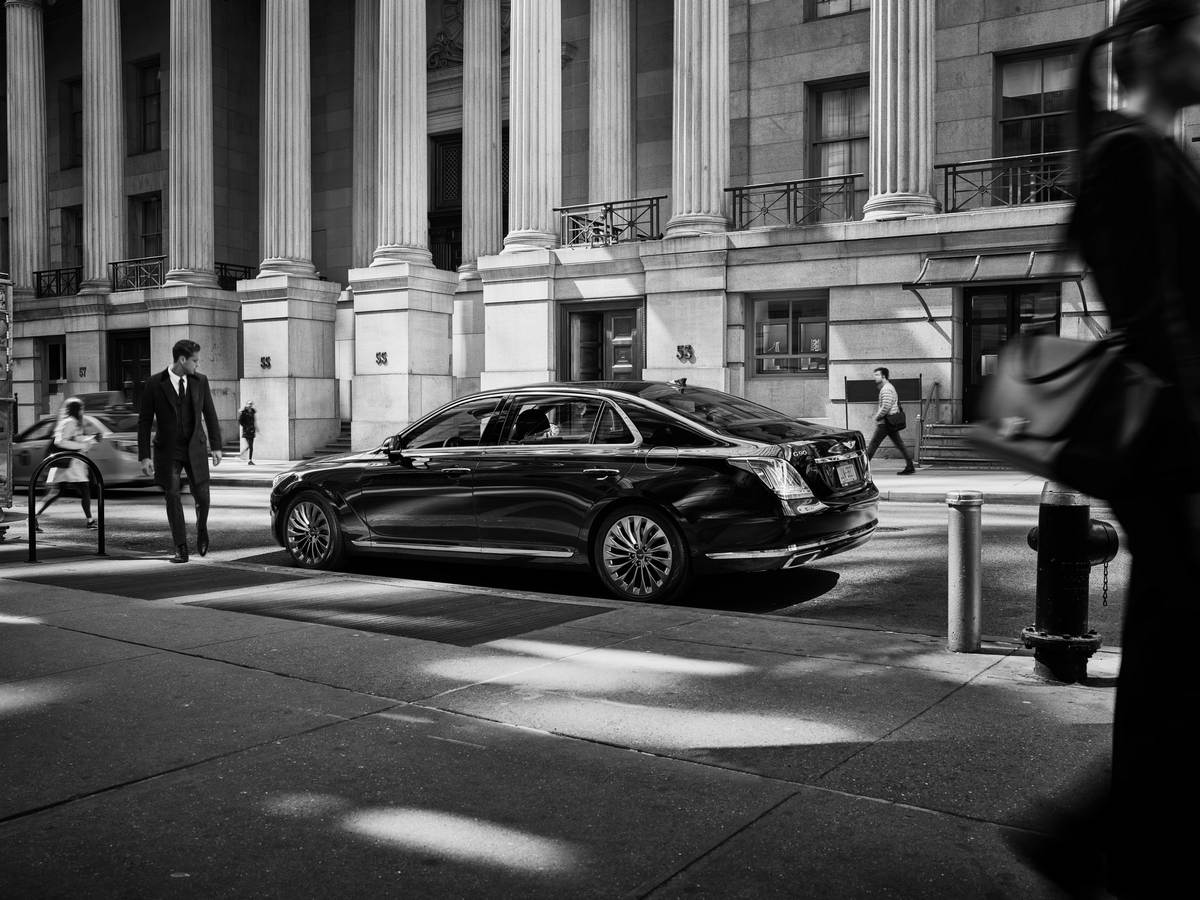 By: Jag Dhatt
When it was announced in 2015 that Genesis Motor LLC would be an independent brand, there were a few sceptics (yours truly being one of them), especially since the brand wanted to compete with the established luxury giants. My eyes did rise when the brand unveiled its first car, the G90 in 2016. When the G80 was launched the year after, people began to take notice. And finally, little brother G70 made its debut and in 2019, won the title of North American Car of the Year. That’s a pretty impressive first five years for the brand, considering its aim is to only build luxury vehicles.
The first G90s were already good cars, trying to rival the likes of the BMW 7-series and the Mercedes S-class; however, even though initial impressions were good, Genesis was not a comparative foe. But that didn’t stop Genesis; the brand spent time, energy, and money to make the 2020 G90 even better, and it is much much better. When first looking at the 2020 G90, your vision falls on those wheels, beautiful 19” G-matrix dish type wheels that Genesis says were inspired by light reflecting off an illuminated diamond. Yes, they look amazing, but trust me, they’ll be a pain to clean. The wheels pair nicely with the massive front grille, giving this luxury sedan presence on the road. The hood is lower and sleeker, matched nicely with quad lamp headlights.
The wheelbase has been upped to 3, 160 mm, thanks to shorter front and rear overhangs. This allows more, much more, legroom for rear passengers. I’ve got a couple of friends who are over 6’2” and even they could stretch their legs.
The overall look of the car is quite nice and appealing, with very few, if any, saying that it doesn’t have all the credentials of luxury look. Kudos to the design team for doing a fantastic job.
Even the interior is on par with what you’d expect in a luxury sedan. The massive center console is angled, like what you’d find in the Audi A8 and it’s a great look. There’s a beautiful combination of supple Nappa leather, suede, wood and brushed metal. The materials are soft to the touch and every aspect of them rival the German interiors, but at a much lower price. The seats are seriously chesterfield quality and comfort. The driver enjoys 22-way adjustable seats while the front passenger has, alas, only an 16-way adjustable seat. Sheesh, I’m thinking back to 10 years ago when 8-way adjustability was impressive. Since this is the G90, rear passengers also have reclining seats, and if you’re behind the front passenger, you have the ability to push the front seat further forward for even more of a recline. According to Genesis, the South Korean president’s daily drive is a G90 and it’s perfectly fitting. I had the opportunity to not only drive the G90 as a daily driver around the GVRD, I also took it to an event in Kamloops. Driving the Coquihalla was effortless, both on the G90 and on me. I simply enjoyed the comfort of the seats, the music from the sound system and the blur of the scenery passing me by. Writing that the ride is comfortable is an understatement; it’s soft, quiet, cushy, and reminded me of our 1978 Pontiac Parisienne. The base power plant is the naturally aspirated 5.0L V8 that puts out 420HP and 383 lb-ft of torque to an impressive all-wheel drive system. And let me tell you, this motor is butter smooth. While it may not pull as fast as the competition, drivers will not find the need for more power. Remember, this is a luxury sedan and not a race car. Yes, there is Sport mode and you can feel the difference in the steering, throttle response and even the exhaust note. I used the various modes, but in all honesty, kept it in Normal because it’s what the car is built for. Now, there is a factory order turbocharged 3.3L V6 that is available and although I didn’t have the chance to drive a G90 fitted with that configuration, I think it would also suffice for this car. The Genesis 3.3L is a gem of a motor, and costs about $3000 less than the less-efficient V8. You really can’t go wrong with either choice. The G90’s V8 is mated to a responsive 8-speed automatic transmission. Shifts are smooth and effortless, and you really can’t even feel them, unless pushing the car hard. If you put the car in Sport mode, use the paddle shifters to make the drive slightly more exhilarating.
Even around town, the G90 proves to be a nimble car. Steering is light for every day driving and thus, turning it to park or get out of tight spots is quite easy. A really cool feature of the G90 (and other Genesis models) is the pop-up window between the gauge clusters in the dash that shows either the left or right side of the vehicle depending on which side turn signal is activated. Similar to the Honda Lanewatch, I find the Genesis system better because it offers views of both sides and the image is where the eyes naturally migrate to, rather than on the infotainment screen.
Speaking of the infotainment system, Genesis engineers and designers did a fantastic job. Supported by a huge 12.9” center touchscreen, not only is the system intuitive, it’s easy enough for an newbie to use. What’s more is that the system is fast and glitch-free. Everything from pairing your phone to selecting favourite stations is a breeze. Voice control works well and Bluetooth reception is very good, as expected. One gripe that I should share is that the system is very similar to other Genesis, and…cough, dare I say, some Hyundai models. I would have expected the interface to be slightly different considering the G90 is aimed at a different market. And yes, for you cell phone ecosystem fanatics, both Android Auto and Apple CarPlay are supported. One really cool feature that needs to be mentioned is the automatic driver seat programming. Rather than select the correct position manually and then set it as a favourite, Genesis allows you to input your height, weight, inseam and voila, the correct seating position is suggested for you. I did try it and honestly, it felt pretty good.
The Genesis brand is fairly new to the world of luxury vehicles, and that’s never a bad thing. With a new brand comes new visions, ideas, and hopefully vehicles that are different than those we’ve been become accustomed. The 2020 G90 is a perfect example of Genesis taking on the established luxury brands, but at a much more attractive price. Will the G90 win over those considering buying a Mercedes S-class, BMW 7-series, or even an Audi A8? Immediately, maybe not; but I mean it’s also hard to have a diehard Ford F150 owner get into a GMC Sierra. But if buyers keep an open mind and focus on what the G90 offers, then it’s a viable option for sure. The G90 ticked off almost all elements for me for a large luxury sedan. The 2020 G90 starts at just under $90K.