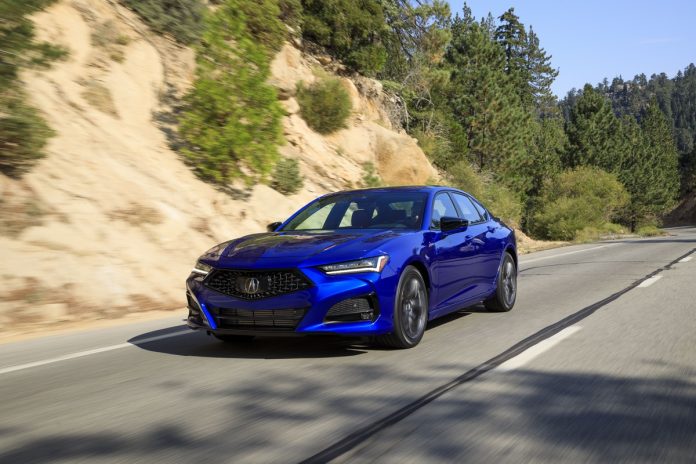 “A rekindling of the essence that made Acura what it was”

The essence of what Acura was is rooted in sportiness.  It was a brand that had unique styling, aggressive lines and driving mannerisms and dynamics that thrilled and excited you.  It one of the primary reasons I was drawn to my Acura Integra in the early 90’s when I was fortunate enough to own one during my senior year of high school.  The TLX looks to revive this lost essence.  With proportions that are longer, lower and wider than its predecessor.  Completely redesigned for 2021, the 2022 TLX remains largely unchanged except from Trim modifications. However, the redesign was substantial.

With increased proportions you would expect considerable upgrades in space.  That is definitely the case with the front seats. You have 14-way power adjustments as well as 4-way power lumbar adjustments.  However, the rear occupants are not so generously accommodated and in fact the TLX loses out to its German competitors in this segment of the race.  Materials are rich with seating surfaces being adorned with a gorgeous combination of leather and “Ultrasuede”.  The ELS powered sound system fills the cabin with deep bass and offers a 10.2 inch infotainment screen.  The system has been upgraded from previous generations and has jumped forward in leaps and bounds but utilizes touch pad as the only means of input.  The pad is not like that of Mercedes or Lexus. Acura calls it “True Touchpad Interface”.  This innovative technology operates similar to a touch screen. Wherever you touch on the pad, the interface responds, mirroring that position directly on-screen.  In real world application the system takes some getting used to.

The TLX A-Spec is powered by a 2.0L turbocharged 4-cylinder producing 272 hp and 280 lb-ft of torque.  This is greater than the 3 Series and C Class alike.  A more potent Type S is available with a twin-turbocharged V6 that will produce 355 hp and 354 lb-ft of torque.  The first return of a Type S model since 2008.  The Turbo 4 is mated to a 10 speed automatic and delivers a smooth responsive driving experience.  Low to mid-range delivery is punchy, if not, super-fast and combined with available adaptive damper systems and independent wishbone setup, the TLX provides a great balance of comfort and sport.  Steering response although quick is a bit “Honda” light and does not provide the weighty feel and feedback of its German rivals.

The outgoing TLX A-Spec was powered by a silky smooth 3.5L V6.  A motor that had a soul and produced 290 hp and 267 lb-ft of torque.  Now that’s actually less than the current turbo 4.  However, this is where the new TLX falls short.  The essence that Acura wants to recapture with the TLX is what is not being felt.  I think this stems from what beats at the heart of the TLX.  That outgoing V6 had a character and resonated the interior of the TLX with life.  I have been a fan of V6’s all my life.  They channel a sound and vibration that’s unique and energizing, almost sophisticated.  4 cylinders have always lacked this.  Granted turbos have given the 4 a punch that was rare, but, they have not given it character.  I strongly believe the Type S will bridge the gap that the TLX needs.  To reignite a fire that lingers deep inside the TLX and will really allow the Acura pedigree to return to the masses.

Long Name Perfect GT Racer For the longest time, the...